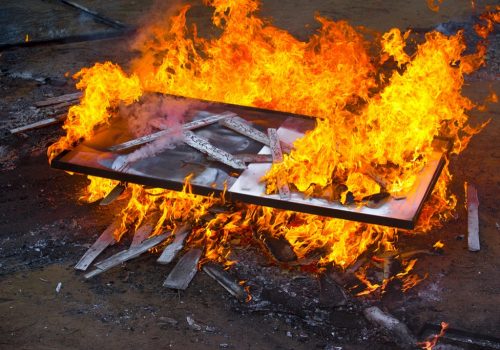 Photographer and artist born in China, one-time member of Agence VU, Gao Bo has created a body of work marked by spirituality. The works gathered in this book were taken during Gao Bo’s five journeys to Tibet between 1985 and 1995. Exactly 10 years after the last images were taken, he went back to these photographs of Tibet, rediscovering them and producing new formal associations that ignored chronology. With this process, the artist both highlights the limits of language and strives to overcome the incommunicability of his experience in Tibet. For him, it is less of a sacrifice than an offering.

This series about Tibet, immortalizing the ancient rites of buddhist monks and the spiritually-infused everyday life in a spectacular landscape between earth and sky, holds a particular place in Gao Bo’s work. Although it is closer to a “traditional” photographic practice than the monumental installations to which he devoted his recent years, it contains the same will to experiment, the same desire to go back to the first photographs in order to extract from them truth in its purest form.

Ten years after shooting the series, Gao Bo conceived a new arrangement of the images. He then went back to Tibet during the summer of 2009, in order to rework them by using his blood as ink as well as an automatical calligraphy he called “language of the soul”. This invented photography, conceived by the artist with the help of Tibetan buddhist monks, forms, image after image, a fictitious alphabet made of various fonts, thus becoming his signature as much as a universal language. Essayist and curator Alejandro Castellote writes: “All of Gao Bo’s work is a circular journey, a permanent cycle of leaving and returning. He creates images and returns to them in order to reprocess, modify or destroy them, inserting his work into this vital loop of creation – destruction that illustrates and affirms the evanescent nature of reality. The autobiographical and meditative character that impregnates his relationship with every aspect of art has its roots in the profound influence that Tibet has had on his personal development. It was the setting for his first photographs, and it could be said metaphorically that it is the metaphysical canvas on which he has traced his movement through life.”