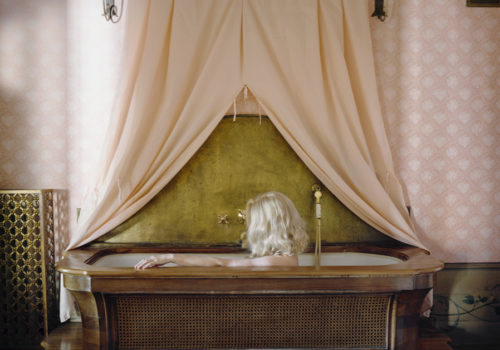 The diverse array of chosen works triumphantly explore different ways of expressing the strength and beauty of the female spirit. The models, which are often the artists themselves, are represented anonymously in either a poetic, atypical, colorful or sensual way that does not shy away from embracing womanhood in all its rich, complex and multifaceted totality. Female artists have long played a quintessential role in art, challenging the status quo and transforming the art world forever with their prolific contributions including, but certainly not limited to, visionaries like Frida Kahlo, Georgia O’Keeffe and Elaine Sturtevant. Taking inspiration, WOW celebrates women and devotes itself to honoring their artistic accomplishments.

Founded by Valerie-Anne Giscard d’Estaing, the daughter of former French President Valery Giscard d’Estaing, Galerie XII LA’s curatorial goal is to showcase the pioneering works of photographic artists from Europe and Asia – many of whom have not shown their work on the West Coast before – to the Los Angeles community. Valerie-Anne says, “This exhibition highlights female artists’ work on the female form. From a diverse array of backgrounds, each artist has something unique to express and was chosen because their perspective on what it feels like to be a woman is respectful and urges the viewer to be contemplative.”

One of the exhibition’s featured artists, Maia Flore has stated, “Often veiled, hidden, or turning away, the faceless representations draw space for the viewer to turn into their sensations”. This depiction of anonymous women is a single common theme of WOW as women often fade into landscapes, hide behind objects or become one with their surrounding elements, casting a hypnotic spell on the viewer.

Born in 1988, Maia Flore is a French photographer who lives and works in Los Angeles. In 2015, Maia Flore became the 20th winner of the HSBC Prize for Photography. Acting as her own model, Maia invents situations where her hair and body act with the landscape and transfigure the reality.

Artist Patty Carroll has been known for her use of highly intense, saturated color photographs since the 1970’s. Her showcased project, Anonymous Women, consists of a 4-part series of large-scale studio installations made for the camera, addressing women and their complicated relationships with domesticity. By camouflaging the figure in drapery or domestic objects, Carroll creates a dark and humorous game of hide-and-seek between her viewers and the Anonymous Woman. Published as a monograph in 2017 by Daylight Books, this series has been exhibited internationally, receiving multiple awards.

Born in Brazil, Mona Kuhn moved to the US to study and is currently an independent scholar at The Getty Research Institute in Los Angeles. Acclaimed for her contemporary and intimate nudes, the prints included in this show come from her most recent series, Bushes and Succulent. In this series, Mona has chosen to pair women’s forms and succulents in a sensual and witty way, which is casting a hypnotic spell on the viewer.

Niemi’s work has emerged as a distinctive force within the venerable tradition of conceptual self-portraiture. She works alone and always in character. With her purposeful and elaborate staging, Niemi is photographer, director and female lead, inserting herself into the lives of her fictional characters. Extending the genre of self- portraiture, Niemi is at heart a storyteller, a creator of fictions. Her images offer a multilayered, cinematic exploration of identity, gender roles and, crucially, our relationship with ourselves.

Chinese artist Ziqian Liu shows her work for the first time in the U.S. Through her featured works, Mirrors, she tries to find a state of harmony between humans and nature. Depicting the inner strength of women beyond their soft and delicate appearance, she chooses self-portrait as a means to know herself better. The image in the mirror representing the idealized world she wishes to live in set against the imbalance of the real world.