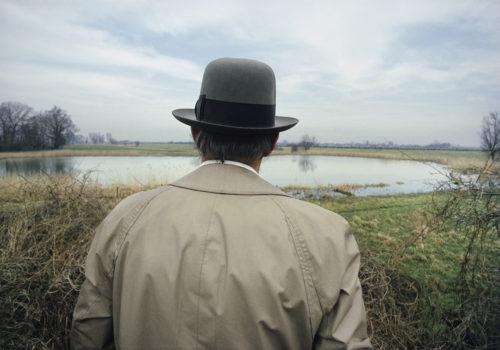 His photographs in the STP gallery stem from four major bodies of work – photographs of the late artist Joseph Beuys, whom Gerd Ludwig accompanied for a week before his monumental exhibition at New York’s Guggenheim Museum; photographs from a two-week visit with artist Friedensreich Hundertwasser (1928-2000) in Kaurinui, New Zealand; a selection of images from Ludwig’s extensive coverage of the former Soviet Union; and a series of evocative images of cars at rest in Los Angeles.

In January 1978, Gerd Ludwig embarked on a journey with Joseph Beuys back to the artist’s origins, back to his roots, to the city of Kleve and its surroundings, where Beuys’ life and work began. For Beuys it was a look back into the landscape of the Lower Rhine, with its deep horizons and towering skies, simple and with depth, barren, like his works – with rabbits, poplars, and swans.

Friedensreich Regentag Dunkelbunt Hundertwasser was an Austrian artist known for his expressive, colorful paintings and eccentric architecture. Gerd Ludwig photographed him in 1978 on the artist’s sprawling, rugged estate in New Zealand’s Bay of Islands, his self-proclaimed “sacred land”. Hundertwasser drew inspiration from nature, used bright colors and organic shapes in his works, was fascinated by spirals, and considered straight lines “immoral and ungodly”.

Gerd Ludwig’s work in Russia focuses on the dramatic changes affecting the former Soviet Union since the late 1980s. He has produced more than twenty reports on the subject for National Geographic, and it could be said that he knows Russia better than any other Western photographer. When asked why he kept returning to Russia, Ludwig replies: “Only for Dusha. Dusha is that enigmatic inner world, expansive and authentic, full of great deep suffering that tempers and purifies. It is an unconscious urge…a belief in the inexplicable and mysterious. It is not the Western search for well-being, it does not acknowledge harsh reality, it is the antithesis of modernity. It is the Russian soul.”

With fascination, emotion, and experience, he has documented change in a realm marked by poignant suffering, bold aspiration, brutal upheaval, and glittering possibility – until media access to the country abruptly ended after Putin’s barbaric attack on Ukraine.

Ludwig’s personal series, “Sleeping Cars” features photographs of cars at rest at night throughout Los Angeles. Undeniably, Los Angeles is the city of cars; vehicles are the blood in the city’s veins. Ludwig documents where these iconic Los Angeles inhabitants reside at night – crammed into driveways, proudly displayed in front of homes, shining under streetlights, covered in tarps, or simply naked. The viewer is invited to become a voyeur and explore with Gerd Ludwig where these cars go to rest at night.

Gerd Ludwig explains in the introduction to his monograph Sleeping Cars, “My cars are loners. They command their own space and enjoy showing off their presence. Like a devoted bird watcher, I have learned to recognize their sleeping pattern. With voyeuristic pleasure, I have spied on them in their nightgowns. I’ve watched some sleep in the nude; some take afternoon naps, and a few lucky ones get to sleep together.”