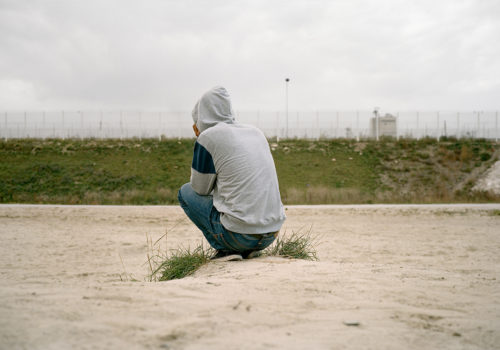 After the success of the exhibition Borders at the Rencontres d’Arles 2021, the Sit Down gallery presents Jean-Michel André’s first exhibition of the series Borders in Paris at the gallery.

Borders started in 2016 in the Calais jungle, at the moment when the jungle was being dismantled, and was developed over three years. The photographer explores the notion of borders in this series.

Jean-Michel André travelled back to Italy, Spain and Tunisia to follow the paths taken by the refugees. Borders is not a documentary series since the artist does not give captions to the shots on the refugees but, instead, reflects on them with suggestive vocabulary.

The temporality is floating, the space is undefined. In this way, the artist deliberately erases the migration map.

It is indeed the hope for freedom that the photographer, from his point of view, tries to translate. Like a visual palimpsest, composed of fragments of landscapes, portraits, and texts, the exhibition invites the viewer to a journey, that of the refugees, of wandering but also of hope and resistance.

The series Borders, by Jean-Michel André, is a long-term project looking at the dream of those who flee their homelands for a new El Dorado. As in his previous work, André explores notions of economic and migratory flow. Rather than holding to a strictly documentary model, the work subscribes to a narrative style that’s neither linear nor predetermined.

A similar sentiment of political and ecological awareness is shown by his choice of subjects. From Calais to the island of Lampedusa, passing through Spain and Tunisia, he exhibits the courage of these people who have been deprived of their families, displaced due to religious conflict, or climate and economic disaster. A friendly epistolary relationship grew out of a meeting with writer Wilfried N’Sondé, comparing writing and photography, imbued with a profound humanity. N’Sondé’s words tell of heartbreaks, hardship and the dignity of a people facing departure without return. In response, André’s choice of overexposed images allows him to obtain uniform colors tending toward lighter and ultimately soothing hues. The result is an impression of calm, despite the tragedy of the situation. There is no sensationalism in this approach. Rather, the beauty of a snow-capped mountain, an isolated house or a winding road crossed by men and women determined to find a welcoming country is sublimated here. The prints move between white and ocher light, and black, organic landscapes, metaphors for dreams to come and tragic journeys.

Though solitude, isolation, and fear punctuate these stories of broken dreams, a glimmer of hope can always be found. As an involved observer of wandering populations, André offers an act of resistance here. It consists in tirelessly rethinking the place of human in a time of great global questions, and reminds us of the fragile nature of our civilizations.

Graduated from the Gobelins school in 2000, Jean-Michel André continues his creative photographic work where visual and documentary interpretations intersect. His approach is based on a political and poetic vision of the territory. He questions its limits, its memory and its evolutions. He also explores the notion of circulation, and particularly that of economic, financial and migratory flows.

His work has been shown in exhibitions, residencies and publications in France and abroad and is represented by the Sit Down gallery. His photographs are part of the collections of the Clément Foundation and the Bibliothèque nationale de France

The exhibition is part of the Photos Days tour