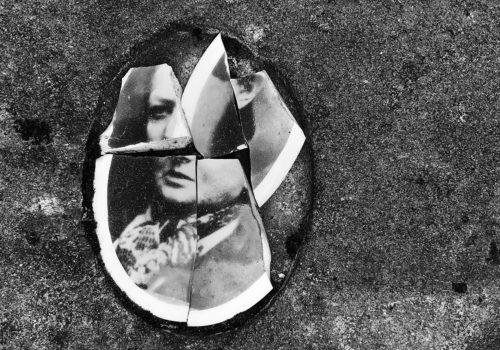 Far from heroic figures, of great men and great women, the memory of the 20th century is communicated to our hearts more favorably by the documents of private life, the traces of intimate or family memories than through the evocations of great history. . In Les Années, Annie Ernaux lists the marks of passing time, commenting on old photographs on which personal and collective stories are projected, intertwined. It is because these yellowed photos of everyday life carry a fragment of past reality to us and make it perceptible to us as if by contact. But they also make us feel a relationship to the past which, in its own terms, is itself over. We don’t take photos like before, the materiality of the images has changed. In other words: the way of inscribing this or that person in the memory is no longer the same today. What analog photography tell us of everyday images is above all that they belong to a past century.

Chantal Stoman and Marco Lanza, each in their own way, make this process of photographic memory visible to us. The first, Chantal Stoman, using a process characteristic of the cult of the deceased in the 20th century: photo-ceramics. The artist rephotographs funerary portraits in cemeteries which, subjected to light and bad weather, end up degraded light is both what reveals and what destroys, she tells us. The reference to “this has been” by Roland Barthes in the title of this series sounds here like an address to the viewer, a memento vivere: “remember that you are alive! “. A process of spontaneous solarization affects the images over time and acts as a reserve of shadows, bleached by material degradation. Time does its work by choosing to erase parts of faces or people, in the case of group portraits. And as if to reverse the effect of this erasure, she prints these photos using the same process, on ceramic, restoring the images to their original material.

The second, Marco Lanza, treats this memory according to another principle, more playful, with the sharp eye of the photographer in search of patterns. He cuts squares in portraits of amateurs, as if to extract them from their context and arrange them like one transforms a material to perfect its quality – according to an aesthetic principle, he extracts a visual form and gives a second life to a forgotten picture. This aesthetic gesture carries with it the memory of an era, the 1940s to 1960s, to which the artist feels close: details of daily life are projected into the image, landscapes encountered, objects that remind us of an anecdote, as in a novel by Georges Perec. But we can also, conversely, consider this gesture as an elision. What remains are photos cut off from their subjects, where the image becomes a hollowed-out frame, the setting for a vanished portrait. Chantal Stoman and Marco Lanza both speak to us of a temporal estrangement, of an alteration sometimes fortuitous, sometimes voluntary, of the memory of the years.