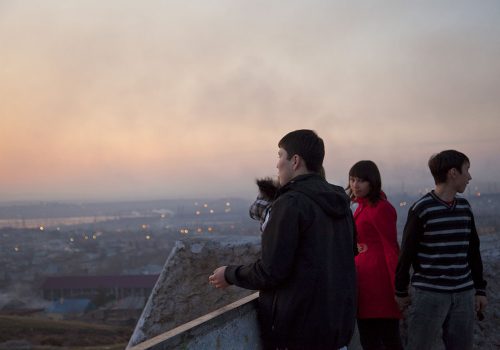 Having initiated a series of dialogues for a few years, the Galerie Odile Ouizeman presents the crossed perspectives of two artists who explore photography, writing but also video, Tim Parchikov and Guillaume de Sardes.

“From one city to another, I have only pursued dreams”, “atmosphere of disturbing fairyland”, the words that accompany the photographs from the project Towards the East of William of Sardis find a particular echo in that of Tim Parchikov, Magnitogorsk. From Stalin to Putin.

Tim Parchikov and Guillaume de Sardes see history, both large and small, as a field of experience which they travel to capture the essence of the moment. These two photographers construct an atmospheric, cinematographic image, a shift that draws the eye towards a pictorial field of force. With an obvious magnetism emanating from their images.

Perhaps another reason for Tim Parchikov to cast his mischievous and magical gaze on a town that appeared out of nowhere in the 1930s south of the Urals, Magnitogorsk.

Literally named after the Mount of Magnet, a magnetic anomaly that encircles it, Magnitogorsk is today a city frozen in time near a huge pit signifying that all the iron has been mined.

It is one of the most polluted cities in the world which buries utopias and absorbs inhabitants without illusion or disillusion. A city enveloped or engulfed by a mist that escapes from the central organ of the city, the factory, and diffuses its warm, dewy light.

The scenery of a fantastic production made without special effects. A factory and its managers who control the entire economy of the city, with in the background the threat of a new economic crisis, competition from Chinese metallurgy or political disagreement between Russia and Kazakhstan. It is also a threat that Tim Parchikov saw in Magnitogorsk because these myriad factors can lead the factory to bankruptcy and the city to economic and humanitarian disaster.

However, should we see the works of these two artists as a simple testimony?

“The witness for a philosopher is, in a way, as strange as the poet or the madman” * says Stanislas Breton.

It remains for us to initiate a movement and to follow, the time of the dialogue, these two artists in these East Side Stories … From Stalin to Putin.

Borrowing from the cinema to choreograph the visual suspense he transcribed comes from his years of training in cinema. His exhibitions are hosted around the world, notably in Moscow, Multimedia Art Museum and Museum of Modern Art, Madrid, Juana de Aizpuru Gallery, Paris, European House of Photography, Daegu, Photo Biennale …

Born in 1983, lives and works in Moscow and Paris.