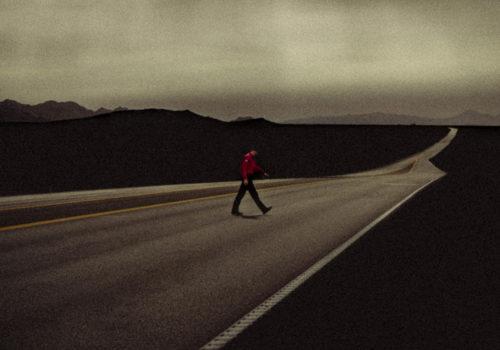 Imbued with an aura on almost fantastic, Stéphane Mahé’s images lose us in the labyrinthine narration of a mysterious logbook offering a wandering of the mind. The photographer with an alert and fleeting  brush handles the effects of light with the delicacy of a tightrope walker to reveal to us the patient inventions of shadow. Evanescent outlines coiled in twilight chiaroscuros, between magical realism and dreamlike symbolism, his photographs strip reality of its insipid rags to put our sensitivity on edge. The fable, the tale, the odyssey, flourish in the out of range and tickle the imagination. The vibrant color of spontaneity carries us away and the artist manages to capture our qualms, in their resolute solitude, as if this eternal round of “pictorialist” scenes determined the tragic history of the world.

Because capturing the feverish essence of a landscape, its intimate breath, to reveal the perpetual drama of conflicting forces — the clash of space and time — allows us to redefine the links that photography maintains with the world as the “impressionists” had done in their time for painting. Here too, the material, the texture, the grain are used to create a new emotional topology, a colourful, floating universe, coated in the fog of feelings. The strangeness of this surreal pictorial atmosphere upsets the landmarks. The figurative and the abstract mingle. The real and fiction merge. Yet everything is in the world. Thus, the instinctive dreamer approach of photographer Stéphane Mahé is not to be outdone: the alchemy of the changing states of the sky is very present with vividly sketched moments, the wet light of squall, the density of the celestial vaults giving the stars, a pictorial materiality that exalts the darkness and enigmatic characters that outline the perspectives by tearing the darkness.

But the narration is not absent in the series of the artist photographer. Indeed, there is a dynamism there, all cinematographic, which freezes the moment to better decompose, thin out, the real. This subjective time becomes significant when it introduces an imminence, a suspense, while the eye is caught up in the whirlwind of possibilities. A metaphysics of crossing the mirror, in a way, which allows this vaporous shift, this step aside, this victory over rationality to bring together the tangible and the imaginary. In these snapshots of lost time offered by Stéphane Mahé, each image — taken in its individuality or as part of a whole — creates this serpentine writing, this sensitive and poetic language, which recounts the invisible. And the retina replays the film of impalpable myths traversed by the song of oblivion. The cast shadow that caresses the viewer seems to have a will of its own, the deserted but very inhabited landscapes give rise to hopes, the surprising high-angle and low-angle framings wander reality while a singular palette and a synthetic treatment of forms bring this unity of time and place specific to film noir. A rhythm arises, generated by the play of shadows and lights. They animate the space by inexorably attracting the spectator who, carried away, begins to dream on the wings of the wind.