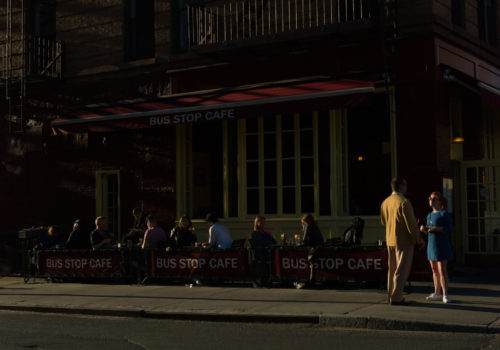 For fifteen years, the Franco-Iranian artist Chervine (born in Tehran in 1972) has been walking the streets of New York and caught what his keen eye catch on the chance of his urban wanderings. Like an Edward Hopper of photography, he looks at New York passers-by hurriedly crossing the main avenues, anonymous people trapped between two blocks, individuals crushed by this forest of concrete and steel, people dropped on meeting places, others frozen in moments of loneliness or even bewilderment. This self-taught photographer manages to capture the moment and restore the fleetingness of shadow and the magic of light.

Once you see a photo by Chervine, it stays imprinted in your mind, etched in your memory. Beyond the demanding observation and the feeling of authenticity, Chervine paints with the help of light with an exceptional, sometimes disturbing stylistic agility. “My photos are taken in ordinary places, banal places, where life carries on. I have always considered the streets of New York as so many stages and its inhabitants as so many actors who interpret their own play, their real history, their real life ”, explains this engineer by training, whose family left Iran to settle in France when he was only eight years old.

More than a documentation

Far from the idea of ​​a simple documentation of this city-world, Chervine uses the urban landscape of this megalopolis as an adornment, an ornament and a playground. With his process, he imprisons bodies and decorations in the space of a ray of sunshine. He uses the sun as a spotlight to illuminate his everyday theater, as guided by Ahura Mazda, “wise Lord” and “watchful teacher”, this Sun God of the ancient religion of the Persian civilization.

Result: Chervine’s images offer the gaze of enlightened souls who cross, confront, tame in public space. Like that couple chatting in front of a cafe in the West Village, or that group of coworkers crossing the avenue on Wall Street, or waiting in front of the traffic lights on Manhattan’s Lower East Side, or that man in the middle of the crossroads. paths, or a cyclist in the Meatpacking District. Ordinary, harmless moments.

As a perfect watchman, patient and passionate, Chervine, who grew up in France and who moved to New York in 2008, acts as a corner sentry from the street, across the avenue, at the terrace of a cafe.

But what is he really looking for? A face, a head, a character, a skin, a facade, a light, a color?

“I educated my eye to seek and locate the light in this grandiose and magnificent city, with its constructions which soar towards the sky, its Art Deco buildings, its majestic avenues, watered by a divine light and its diverse and variegated social fabric, ”he emphasizes.

“I’ve learned to watch where the light beam hits in the space. I got to know when the sun’s rays shine on such and such a corner or facade. I have developed a certain sensitivity to convergences and light densities. Sometimes I just wait for someone to walk past my lens at a specific location. Often, it is chance that brings its share of surprises. It’s stealthy. I like that feeling of instinct, of speed in order to create a long and intense moment. I love the magical side of natural light, ”he explains.

Chervine displays his mastery of the geometry of space. He structures and composes his images vertically and horizontally. Fragments of life and architecture. The colors are distributed and placed in a regular way. All the elements composing the image oppose or agree according to the intensity of the sun.

It uses the modulation of light to bring depth. Shadows dominate, dark areas compete for light areas in his pictorial language. This play of light, without transition, causes a photogenic intensity and produces a feeling of the intimate moment.

Chervine’s urban photographs are loaded with tension, contrasts and dampness. Each time, this reflection which fulfills its mission of scout, indicator and even warning. Always, that moment of truth, that day. There is the color detail that dominates; this yellow as a note of hope in this urbanity that crushes the most vulnerable, the lonely, this fuchsia with its touch of gaiety in a dark and austere universe, like a big city like New York. Or this bright red to better stand out in the crowd.

Chervine invites us to imagine the story of each of these anonymous characters, a journey through their day, their movement, their destiny. He lets the mystery hang, the doubt to settle.

“I have a very distant relationship with my characters. I never get near them. I try to fit them into my composition as one element among others. Besides, they are  unrecognizable. Often they are lost in the background. They are in profile or in motion. […] In my approach, there is this desire to seek in real life an image which will collide with my pictorial and cinematographic imagination ”, he concludes. Indeed, in the images of Chervine we can quickly trace the multiple references to film noir, and especially an immersion in his Hitchcockian universe!