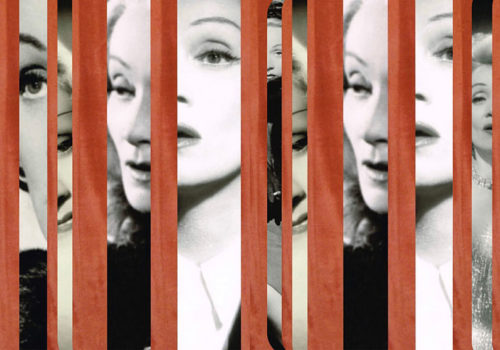 With obsession watch out for another obsession  by Jean-Luc Monterosso

Pierre Passebon is an extraordinary collector, able to collect more than five hundred photographs of the unforgettable interpreter of the Blue Angel and, at the same time, take an interest with greedy acuity in comics, in the myth of Tarzan or masculinity in Western iconography.

“I have irrepressible visual desires,” he says. A passion bordering on obsession that leads him to move from the acquisition of images to their production.

It was during a chance meeting with the photographers Édouard Taufenbach and Bastien Pourtout that the idea of ​​an assignment was born: to create a mise en abyme of his collection. Create new images from Marlène’s photographs used as visual quotes.

Édouard Taufenbach and Bastien Pourtout have thus developed a new form of photomontage based on the immediacy of Instagram and the possibility of communicating images remotely from their Iphone. They mix images , as a DJ would music, the different photographs that they send each other and on which they react live.

This digital construction with four fingers leads to the realization of astonishing works. Marlène’s faces follow one another over time in a form of astounding immobility and permanence, while her legs multiply, creating a perfect stereotype through their closeness and juxtaposition. The same goes for her eyes, her smile, her gestures. Through these effects, comparable to the chronophotography of Etienne-Jules Marey or the stroboscopy used by Harold Edgerton or Gjon Mili, Édouard Taufenbach and Bastien Pourtout are part of a photographic tradition while renewing it. This modernity resulting from a technological diversion, shaking up the chronology, reveals in broad daylight an obsession: that of Marlène Dietrich concerned about the control of her image and who, all her life, was able, as the works gathered here show, to shelter under the mask of eternal beauty.

They have been working together since Speculaire (2018-2019) around the collection of vernacular photographs of Sébastien Lifshitz. The collages made were presented at the Binôme gallery, at Paris Photo the same year, and the following year in Rome, London, Mexico City and New York, the Athens Photography Festival, as well as at the Villa Noailles . They published a monograph on this project with Éditions L’Artiere. Then they presented The method (2020) around the structures of Homage to the square of Josef Albers.

In 2020, they won the Swiss Life 4 Hands Prize for the project Le bleu du ciel, sur le vol de l’hirondelle. They went on a residency at the Villa Medici to carry out this work and decided on their return to become an artistic duo. This project is exhibited at the Musée de la piscine in Roubaix, at the photographic fair Approche, in various galleries and in Arles for Les Rencontres de la Photographie. They produced a second publication with Filigranes editions.

They are preparing an exhibition with the gallery owner/collector Pierre Passebon around his collection of Photography of Marlène Dietrich, two works which will be presented this fall at the Cinémathèque under the curation of Matthieu Orléan for the Cinemode exhibition of Jean-Paul Gaultier.

Their practice as a duo is defined as a method made up of protocols and games. Using different cameras (digital reflex, mobile phone or Rolleiflex), they produce photographs to be arranged, associated, circulated like messages from one to the other – a whole visual language. Always in the process of being made, the images are not conceived a priori, they are invented and constructed in an exchange.