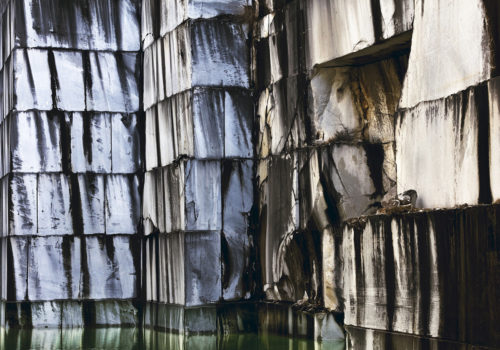 Francesca Piqueras is a paradoxical artist. Her photographs are sound, they capture the murmur of the mist, the breath of the wind on the mountain streaked with marble quarries, on the edge of vertigo. His images break without effort or affectation the silence of the stone, that which bursts under the chisel or the gigantic saws. Her photographs give voice, a deep and serious voice, imbued with a surprising sweetness. The voice of the marble mountain.

Francesca Piqueras is a paradoxical photographer. She does not freeze time, she tames it, lets it flow slowly in each of her compositions. They are absolutely rigorous, the frame never encloses the gaze, but on the contrary leaves it free to wander off-screen, to venture into our imaginations and to create – as we play with four hands – a visual score unique and surprising, totally personal.

An artist resolutely committed to her time, Francesca Piqueras signs here another chapter of a work conceived from her first exhibitions at the Galerie de l’Europe. For this new opus, the artist has returned to the Apuan Alps, above Carrara, where sculptors have followed one another since Antiquity. This time, there is no need to look, as in “Movimento”, for the wounds of a raw mountain, where each quarry bears witness to both the genius of the man and his destructive obsession. Her approach is more interior, she probes the very substance of these wounds, scrutinizes without touching them the shocks, the scratches, the scars of a landscape exploited without concession, up to the marble whiteness of its bones.

On this bare material, Francesca Piqueras casts a stone-edge gaze, following without deviating the intimate structure of the multiple avatars of marble, arranging them in delicate, perfectly measured abstractions. This subtle balance counterbalances a topography of destruction, emphasizing without forcing the line on the paradoxes of a humanity capable of creating, devastating and forgetting.

After a cycle on iron, rust and the way in which nature takes possession of what man abandons, Francesca Piqueras set out to look at the elements themselves. Her previous exhibition, “Fire” – currently on view at the Eretz Israel Museum in Tel Aviv – allowed the artist to highlight the fusion of elements and their release by flames, in a cycle perpetually fueled by man since the night of origins. A subtle aesthetic criticism of what is now called the Anthropocene, and which manifests itself sotto voce in each of her exhibitions.

“Marble” pursues and develops this approach, transposes matter into unreal abstractions, into strange chromatic vibrations. Here, few or no landmarks – a symptom of  humanity adrift – but a visual emotion perfectly orchestrated by the artist, who here composes an inspired mineral symphony, almost surreal, and sublimates what nature offers to those who can see. , understand, and hear with the eyes.