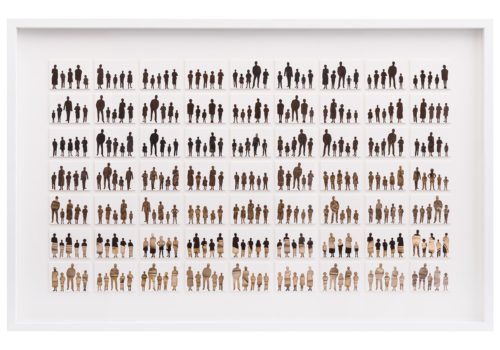 Collecting anonymous photographs has been at the center of Emmanuelle Fructus’s work for several years. Also in 2006, she created Un livre – une image, a structure that allowed her to explore family photography by acquiring documentary image holdings. Observing these poor images, listing, classifying, feeds reflection on amateur practice: many images produced in large numbers, are stereotypical and banal. In fact, these photographs generally receive little attention. Logic would dictate that we seek an aesthetic or documentary value that takes precedence.

These hundreds of thousands of images are generally neglected, and so this is where the work of Emmanuelle Fructus begins. Always finding a place for them; this concern led her to obsessively collect these poor images. A protocol, a synthesis of these anonymous people takes shape so that they are organized  first in small frames where they are gathered in groups of five or six, then in rows and columns, by affinity, aesthetic or density, and finally put under a glass frame. These anonymous actors are mostly chosen in feet, cropped, relatively clean, and, as far as possible, without object in their hands. Like a seamstress, Emmanuelle Fructus tirelessly cuts these photographic characters with small scissors. Her incongruous actors come as much from the end of the 19th century and the 1970s. She extracts these human forms from their context to classify them according to their density, their brilliance, their colorimetry on small white rectangular cardboards where each is repositioned in a space. neutral and without history. A new order of things.

This art work questions the link between photography and its techniques. Photographic paper is at the center of Emmanuelle Fructus’s attentions, she devotes an infinite amount of time to cut out as clearly as possible and to classify her shots from the densest to the lightest. But this ranking is far from being aesthetic. Photographic matter is like a pigment. It is a color, a particular note that we bring together with others so that this whole shares an organization, a meaning.

Each picture must contain more and more characters in each series, there are never enough of them. Like a series of numbers and dates, these paintings also speak of our History, that of the disappeared, the survivors and the living.

Family photography doesn’t tell us anything in itself. Also, it is always difficult to project ourselves into the historical facts which turn out to be fairly abstract phenomena, since we have not emotionally experienced the said period photographed, represented. Thus, all these characters extracted from their original images, newly assembled like lists of names, carry within them the silence of their intimate history and that of our history. Under this apparent rigor of classification, the richness of the colors of black and white as well as the unspeakable history of these photographed individuals become the very subject of her collages.

Opening on Thursday September 30 from 6 p.m.