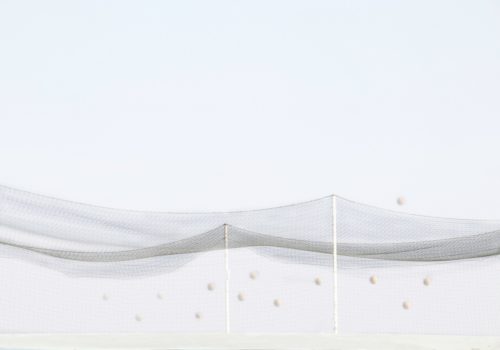 Breathe deeply, look at the images. This is a brief moment of concentration, useful for entering the emotional state in which the artist – Tina Cosmai – wants to take us through the trilogy Epiphanies. The other physics of landscape.

Today, more than ever, we are aware of what it means to be in such a state of uncertainty, what it implies and how demanding it is to face it. Yet it is precisely from a condition of indecision that Tina Cosmai’s journey originates, and now, through her photographs, we too can somehow experience the whole evolution of a multiplicity of feelings – from bewilderment to freedom – and of universal concepts transferred into images.

Resisting discreetly: this seems to be what the first “act” of Tina Cosmai’s trilogy, entitled Via di fuga a mare.

As it should be in an evolutionary process, in the second chapter of the trilogy, entitled Manikins, more elements appear: the colours become slightly more saturated, the frame becomes fuller, the dynamics change. A condition of suspension still prevails, even though its form has changed, different and lighter than in the first project, a change that has gone hand in hand with the artist’s catharsis.

Alongside the resistant human presence on the beach, “invaded” in the distance by overbearing industrial constructions, this time there are a number of geometric shapes – whose presence is delicate but decisive – chosen and placed in the frame at specific points, to support and protect the human presence on the seashore.

These geometries represent a further step towards the third and last chapter of Tina Cosmai’s trilogy, the most playful and liberating: Lùdica.

This time it is a colourful lightness that fills the shores of Vado Ligure. But the game, although typical of childhood, here mixes the parts and is mature and aware, both because this last element of the trilogy represents the conclusion of a path that goes well beyond the photographic one, and because the playful iconographies chosen and superimposed by the artist in her images are the result of careful research and a long post-production phase on the original shots.

The Trilogy is on display at the Alessia Paladini Gallery, via Pietro Maroncelli 11 – Milan, until November 6, 2021.

The exhibition is part of the 16th edition of the Milano Photofestival.

The Manikins project, won the 2nd edition of the New Post Photography award at the Mia Photo Fair and will be exhibited at the Milan International Art Fair, from October 7 to 10, 2021, at Superstudio Maxi, via Moncucco 35 – Milan