Gail Albert Halaban : Out My Window 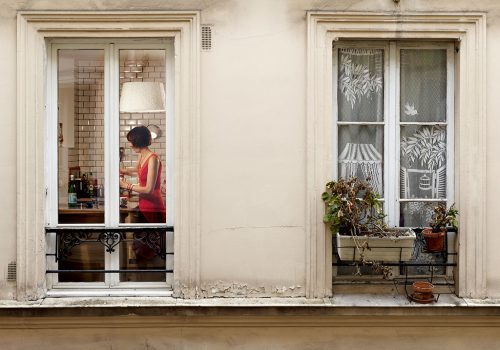 Edwynn Houk Gallery presents a solo exhibition of recent work by Gail Albert Halaban, from her ongoing series Out My Window. The show will be composed of eleven photographs, selected primarily from her 2018 George Eastman Museum exhibition, many of which have never before been presented by the gallery. It will feature an array of international destinations from Paris to Istanbul, as well as several cities illustrated in Albert Halaban’s newly published book, Italian Views, including Venice, Rome, and Naples.

Out My Window originated in 2007 after Albert Halaban moved to Manhattan. Fascinated by the interpersonal dynamics of urban dwelling and the unspoken social contract between neighbors who observe each other’s domestic lives through their apartment windows yet appear to be strangers in public, she anticipated experiencing the quintessential paradox of life in a densely populated metropolisthat of feeling lonely while constantly surrounded by people.

In fact, she discovered that windows could function not only as barriers, but also as bridges connecting neighbors. She began collaborating with residents across New York City, directing them within the frames of their windows as if they were actors on a stage. Although these images evoke a sense of voyeurism and the transgression of peering into the private lives of others, it was critical to the artist that all of her subjects were willing to take part. Rather than shooting from street level, she photographed the view from the window of one participant into that of another, thus recreating the intimate but removed experience of city living in her photographs, as well as introducing two neighbors in the process.

This initial endeavor sparked what has become a twelve-year project spanning cities across the globe. Albert Halaban has allowed the series to evolve organically through the relationships she develops with her subjects, and the resulting bodies of work are uniquely shaped by the particular characteristics and customs of each city and its inhabitants. Each one is a story in its own right, illustrating the nuanced relationship between that city’s inhabitants and its architecture, as well as a chapter in the artist’s continuous exploration of the universal question of what it means to be part of a community.

Over the course of creating Out My Window, Albert Halaban has become increasingly conscious of the importance of community building in her practice; it has become a specific intention, rather than a byproduct of her art making. The past decade has seen rapid globalization and digitalization, amplifying questions of social isolation in modern life. Albert Halaban’s latest book, Italian Views, is her first to feature text from her subjects, describing their perceptions of the neighbors they have been quietly studying from afar, often for years, and the elaborate narratives they’re woven in their minds from clues gathered from their windows. By engaging in Albert Halaban’s collaborative process in which neighbors meet and work together, these imagined relationships grow into real human connectivity.

Gail Albert Halaban : Out My Window