From Ukraine: The Time of Yevgeniy Pavlov 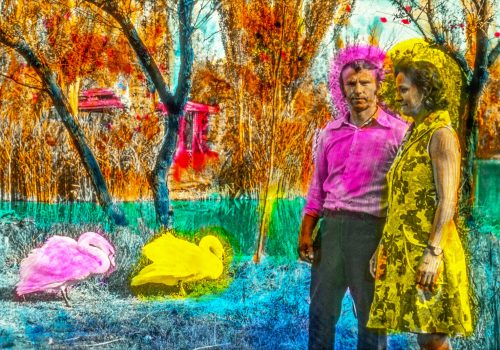 Every month, Anna Akage holds her column in The Eye on the history or news of photography in Ukraine. She is Ukrainian, a journalist and passionate about photography.

The USSR is a very big word. Having ceased to exist as a state formation, it continued, continues, as a memory and as a feeling. And it is impossible to say: this time has passed; another time has come. Dividing or editing of time does not cancel its continuity and makes the remaining artifacts even more valuable. For several years now, Ukraine has been undergoing another stage of reviewing – decommunization: against the background of a falling monument, it is supposed to say about the mistakes of the past. But in the long run, the importance of mistakes is inferior to the importance of feeling the very continuation of history.

This is the second publication in a series of articles on Ukrainian photography. This time we will talk about the Kharkiv school of photography, or as it is commonly called in Western media – “another Soviet photography”, and its well-known representative, co-founder of the Vremya group, Yevgeniy Pavlov. In the context of the Paris Photo 2018, the exhibition of his main projects will be held in the Ukrainian Cultural Center, open 6-23 November. The Chronicle of Total Photography was made in tandem with the art critic and interpreter of his work Tetyana Pavlova.

Ukrainian photographer Yevgeniy Pavlov was born in Kharkiv in 1949. The story of his life and photography is tightly bound to the city itself. Heavily damaged after the WWII, having survived long periods of German occupation, the city turned out to be incredibly tenacious, soon becoming the third “industrial capital” of the Soviet Union and the cultural capital of Ukraine. However, the showpiece city had a reverse side, the forbidden world, in spite of, and possibly as a result of, those events.

“Previously, we were all strictly defined in our reactions, emotions, literacy, and education,” recalls Pavlov. “We lived in a hard flow of time, outlined from all sides and in a certain sense, it was easy. If you didn’t realize the limitations of this flow, it felt comfortable. But when you see a thesis, then you can develop an antithesis. I tell my students: “It’s harder for you, then it was for us because we had this antithesis vividly in front of our eyes.” That time made us that way. ”

It was in Kharkiv where the photographic art,  which in the USSR was denied the very right to be called so, broke bright. The official photography was put out by the service of the communist party, the mass one was adopted as arts and crafts, a harmless popular hobby. At each community center, research institute or factory had a photographer’s club, along with clubs for radio amateurs or young naturalist. The photography was strictly regulated and unarmed at the same time; this was how the total control over society was formed, both during professional activities and during leisure time.

“At the time when the Vremya group was formed, the profession of a photographer was associated with a disabled person standing near a monument, whom, the state, due to the disability, permits to make some money by this little business. The pinnacle of photographic recognition was a photojournalist who, from today’s point of view, is also a pathetic element,” says Pavlov. It was generally impossible to explain that you are engaged in artistic photography: the expression “artistic photography” could be found only on the windows of salons where they photographed for a passport or a memorial. Photography and art were not connected in the minds of people, and our task as a group of artists, as I always understood it, was to bridge this gap. All the interest that led me to photography was to practice art. I did not know how, but I felt this channel as a toolkit.”

Yevgeniy Pavlov’s brother was a photographer at the air conditioner factory, where Eugene himself went to work as a mechanic after school. Young mechanic Pavlov began to photograph. In 1968, he became a member of the regional photo club, and in 1971, together with photographer Yuri Rupin, founded the Vremya group within the club, which also included Boris Mikhailov, Oleg Malevany, Gennady Tubalev, Alexandr Suprun, and Alexandr Sitnichenko. The general declaration of the group was “the theory of stroke”.

The members of the Vremya group didn’t create collaborative work, but they were united by the desire to make another, “striking” photographs.

An important factor that influenced the style of the photographs of the group, and the Kharkiv school as a whole, was the quality of the images. Despite the wide availability of materials for the development and printing at clubs, they were still of poor quality. In the process of developing of the new photographic language, it is this quality that becomes its strong and distinctive aspect. Trashiness only later came out as a separate style but began with the natural “trash” of the working conditions.The same thing happened with the topics for creativity: public life was forbidden – the right people worked there, the street was forbidden – the Soviet people perceived the photographer as a spy, the only space remained – a personal, intimate. It was not habitual to talk about this space in the USSR, the naked body would not undergo censorship, and, as you know, there was no sex in the country at all.

In 1972, Yevgeniy Pavlov created his first series of photographs called Violin, showing the company of nude male hippies spending time on the bank of the river. The creation of this project was an important experience for Pavlov as well as for the development of the photographic school. The courage of his visual statement was truly heroic for that time.

“During the filming of the Violin project, Mikhailov told me that he was inspired by the theater, but he was a man from the center of the city, the theater was his usual day. And I, who lived near the tractor factory, saw the theater once in a few years during some cultural trip for workers,” remembers the photographer.  ”Therefore, cinema, as an example of art, was more accessible. Moreover, not all Soviet films about war or constructions were nonsense. A view on the photography as a universal language is has been with me ever since. It seemed that the photographic language was misunderstood, underused, and in order for it to come into use on a cultural level, it needed to be brought closer to the existing signs of the language: the language of cinema, painting, and graphics. The pure photograph associated with the informational image did not appeal to me, as it was moderated by Soviet journalism. Even in the series of direct photographs in the Archive Series, I retouched images in order to stop this “direct” narration and talked about something else. Often hoping, that the watcher will feel at least the strangeness of this moment.”

The aesthetic search of the members of Vremya group meant experiments not only with the themes of but also with the means of printing, all methods for fighting with conservatism and the grayness of life were put into action: painting, collages, editing, the superimposition.

In 1976, the regional photo club was closed due to the “wrong activity” of the Vremya group, however, as a community of like-minded people, it existed for another 10 years. Pavlov became interested in cinema and went for studies to the Kyiv State Theater Institute. He returned to photography in 1981, and in 1988 presented the Archiv Series project.

“When I returned to the photo after the movie, I took up the collages. Superimposition was in trend but working with black and white images it was not enough for me. After that I tried color retouching, – Pavlov tells about his creative searches. – When these methods merged, the Total Photographic project began in which I most fully expressed my vision of photography as a universal language. The first part of this project, about 100 images, I created in the period from 1990 to 1994. After that, I began to study painting of photographs and offered to make a joint project to artist Volodymyr Shaposhnikov. Our last of three common projects, “The Other Sky”, was not fully shown anywhere in the world.”

At the end of the 90s, Yevgeniy Pavlov created the series “House of Life”. The research institute where he worked and had access to the laboratory was closing and this was the last opportunity to work on the printing process himself. Pavlov doesn’t acknowledge modern technologies and never turned to digital photography: “For me, photography related to the film and the film process, in general, is biologically alive. Over the years I love film image more and more. Even if it’s nothing at all. I just love looking at the photo, at this texture, the points of silver.”

“I definitely feel that I belong to the Soviet time. In it, I created my main body of work. The last joint work “The Other Sky” with Shaposhnikov sums up this Soviet pastime. For me, this farewell is quite conscious.”