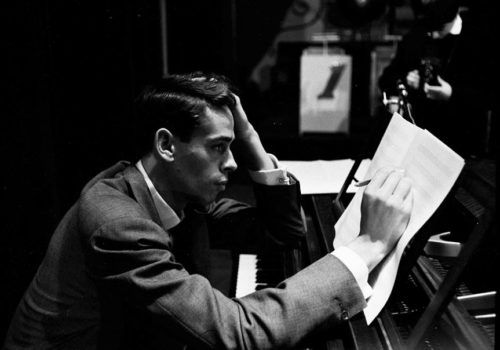 The bonds that tie Paris Match with song are even deeper and more intimate than it seems. It was a staff reporter, Roger Thérond, who, out of friendship, shuffled through his contacts to score an audition for a young unknown singer whose music they had never heard, Georges Brassens. Ten years later, a former photographer from Paris Match, Daniel Filipacchi, then a anchor for “Salut les Copains” on the French national radio Europe 1, contributed more than anyone to a young man’s fame who, although he made his first stage appearances singing Brassens, had since converted to rock and roll, Johnny Hallyday.

In 1976, Roger Thérond and Daniel Filipacchi would become respectively Editor in Chief and owner of Paris Match, while Brassens and Johnny would each, one after the other, become legends. Which proves that if everything is in everything, everything is also in Paris Match.

It is, in any case, legitimate and logical that song would be largely present, since the beginning, in the pages of our magazine. It has its legitimate place because it is, of all the art forms, the one that best conveys that indefinable and ephemeral, yet moving, something that a great news magazine must capture and reflect, the spirit of the times.

The songs of Edith Piaf, Yves Montand, Serge Gainsbourg, Françoise Hardy and hundreds of other artists are an integral part of our heritage, as their loves and lives belong to our shared history. More so than movie stars, the stars of the microphone accompany every moment of our existence. Radio, CD’s, television and the new digital medias bring them right into our homes. The singers that we love are not only familiar, but they are our indirect confidants: whatever the circumstance, there is always a lyric that perfectly expresses our joys, our pains, our uncertainties, that we hum without thinking. We reveal a great deal about ourselves, unconsciously, while singing in the shower…

A universal expression, songs make light of generational, cultural, even linguistic gaps. Brel singing “Ne me quitte pas” continues to affect adolescents just like it affected their parents and grandparents. Fans of Dalida, Eddy Mitchell or Enrico Macias come from all social backgrounds. The English speaking public has no need to speak French to be moved by the genius of Trenet and Aznavour: Elton John considered the former’s songs the most beautiful in the world, and Liza Minnelli admired the latter’s so much she never missed the opportunity to sing her favorite, Les Comédiens, in duos with him.

But there is one thing that touches us undoubtedly more than anything else: the simplicity of the majority of singers, even the most admired. They don’t cheat, they don’t shortchange their fans. Movie stars amaze us. Singers don’t need to “pretend”, to appear at any price: the feelings they feel are common to us all. In life, as in front of the camera, their behavior in life is unchanged. It is because they speak to us from their hearts that we love them and they remain so close to us all.
Olivier Royant, Editor-in-Chief of Paris Match