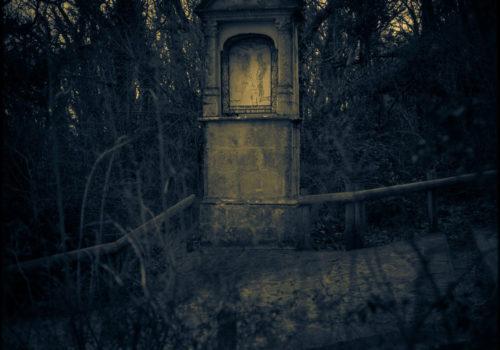 This series starts in autumn 2018 and ends in winter 2022. It was entirely produced in the forest of Sainte-Baume (Var). It tries to understand this need for spirituality, isolation, inner journey that every human is brought to live sooner or later during his life… Spirituality is not necessarily religious, it can be simply “philosophical” (i.e. is my case). During these 3 years, I probed the darkest depths of my soul, where the light that we have always known is extinguished, in search of another light, the one that would guide me towards another life. Each photograph in this exhibition expresses a feeling, a state of mind, a station telling the story of this essential journey. They also bear witness to the psychological impact on people, to the ever-increasing tension in our societies (social movements, wars, diseases, etc.). Throughout this series (about thirty photographs), exit doors are proposed1, they may lead — according to the beliefs of each — towards this other light.

Despite the very dark tone of the images, I wish through this series to convey a message of hope, of resilience, to all those who are going through painful times. Whatever their sufferings, their difficulties, their sorrows: “Don’t let go, don’t sink, other lights exist and are worth discovering”.

The forest of Sainte-Baume

Sainte-Baume (south of France) faces Sainte-Victoire. It has been sacred since the dawn of time. Due to its configuration – at the foot of a gigantic north-facing cliff – it offers lush plant cover, sheltering completely unexpected species in a region deemed to be arid 4 months out of 12. Above the forest, on the side of the cliff, is the cave where Marie-Madeleine according to oral tradition, came to retire after having evangelized Provence (from Saintes-Maries-de-la-Mer). Due to the “presence” of Mary Magdalene, the Sainte-Baume is the subject of great devotion. Since the Middle Ages the “little” Christian people and the great of this world, like Louis XIV in February 1660, go there on pilgrimage.

As a young adult, recently given a driving licence, I loved taking my mother Nicolle, whom I was close to, on the paths that lead to the sanctuary of Mary Magdalene. We did photography there together and we talked a lot. During 2008 my mother, diabetic, declares pancreatic cancer from which she will die, in great suffering, 9 months later. At the end of 2017, in a state of extreme fatigue, my doctor told me that I was diabetic. Incomprehensible (my GP is a woman), I have neither the profile nor a risky behavior and in front of serious analysis results, she suggests in a soft voice: “we must do a scan of the pancreas, I have need to know what’s going on in there…”. Even if it didn’t bode well, this request was the tipping point. There were things I wanted to question for a long time in my professional life… The time had come. I undertook this inner journey a few weeks after this exam. To this day I am well and I feel peaceful in my new life.

I created this series of photographs with a Mamiya C330F film camera (6×6 square format) and 3 lenses (55mm, 80mm and 135mm). Why ?
1. The optical rendering of these old-fashioned lenses offers a certain mystery to images when used at large apertures;
2. Film photography with such a crude camera forces you to work slowly. You kneel for a long time in front of your subject (mostly plants and tree trunks). This time for reflection — to compose the image, think about the different possible framings, adjust the optical constraints inherent in close-up photography, parallax, etc. — necessarily plunges you into a certain meditation… That’s how that the titles of most of the images created drew themselves. They appeared at the time, as obvious.

All photographs were taken on 400 iso film. I then developed them myself then digitized and worked on PC. The colorings were obtained by partial toning by including an asymmetry between the colors deposited in the shadows and those deposited in the lights. This gives what I call “asymmetrical polychromes”.

A word about the author

I was born in 1965 in Toulon (Var). I took my first photograph at the age of 6 and developed my first films around 12-13 years old with my parents at the village photo club. I became really interested in black and white when I reached majority and trained (1988) in the Black and White Zone System with Serge Gal. I wrote and published in 2018 a book on the subject.
I became a freelance photographer in 1991, when I specialized in painting photography (it’s important in my approach as an author). For this discipline I developed a system (Polarization chart) patented in 1996 which allows me to collaborate regularly with regional and national institutions.
In 1999 I had the privilege of being selected to carry out an order from the town of Pierrefeu-du-Var. The object was to photograph in black and white and over 4 seasons, life in the village, to also create a whole gallery of portraits of the most active people (teachers, elected officials, shopkeepers, volunteers, etc.). This fund, made up of some sixty original prints, is kept in the city’s municipal archives.
Since 2018 I have been renting a workshop registered on the Parcours des Arts of the city of Hyères. This is a program funded by Europe. In this workshop, I decided to relaunch a professional activity of shooting from the silver medium (still lifes, portrait, views of Hyères).