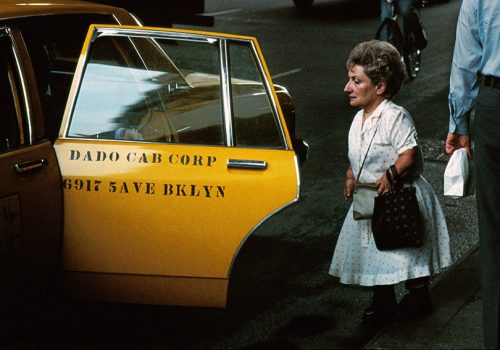 New York up and down was the third project of what I like to call my triptych. To begin with, this meant simply that the three are nearly contemporaneous: both Very Similar and New York up and down were begun in 1982 and concluded in 1986, Portraits of Trees was a little earlier. But choosing this word was also a kind of challenge: because, contrary to what the term triptych suggests, the three projects don’t have much in common, to the point that some people find it hard to believe that they are by the same author, and most have a preference (or a dislike) for at least one of them, as if – from whatever standpoint they are seen – there was always one that didn’t quite fit with the others. I must admit that I took some pride in what to others was an incongruity, and all the more so as the mandarins and apparatchiks of the photographic establishment seemed to hold my eclecticism against me, as if the trouble they had in fitting me into one of their cases was a deliberate insult to their authority.

Of course, Portraits of Trees is not quite ‘nature photography’, Very Similar not quite ‘portraiture’, and New York up and down not quite ‘street photography’. But other descriptions may apply: Very Similar can definitely be considered directive photography, and the remaining two are strictly non-directive. On the other hand, Portraits of Trees could be called ‘classical’ (at least according to my own use of the word, i.e. in the sense that my approach was more objective than subjective), while New York up and down is ‘romantic’ (because I felt involved, as if with each shot I was throwing myself into the subject – even if it was only a puddle on the tarmac). In Very Similar there may be some of both, or at least an ambiguity, a coming and going between them. Be that as it may, moving from one project to the other spurred me on, as it always happens when changing language, climate or perspective. I might add that, for me, New York as a city has always been ‘romantic’, because I have always associated it with some emotional involvement (or rather, as the decades passed, with a series of involvements). But then this is something that my work about New York has in common with Very Similar and Portraits of Trees, and which by itself could justify seeing them as a triptych… I first went there in 1959, to meet the art directors of Glamour and Harper’s Bazaar, but also to visit a woman I loved. Her descriptions of Times Square, of 42nd Street or of the Lower East Side had filled my imagination f , I had been dreaming of this trip  for a whole year long before the evening when she came to meet me at JFK (which at the time was called Idlewild Airport), and to take me, still groggy from the journey and the excitement of our meeting again, straight to these places that to me were both unknown and legendary.

Between that evening in 1959 and the beginning of my project, in 1982, I came back to New York more than a hundred times, usually to do fashion photos, but in most cases only for two or three weeks. All the same, I have calculated that these trips, laid end to end, would add up to a stay of about two years, which is equivalent to the periods of my adult life that I spent in Switzerland, in Italy, in India or in England. But if they were measured by their emotional intensity, the years in New York would count twice as much… This is what I tried to convey by the words ‘up and down’. The highs and lows of New York are not just the transitions from Uptown to Downtown, from the darkness of the subway to the view from the top floors of the skyscrapers, from the temperatures in January to those in July. But also the shifts, between one day and the next and sometimes between one minute and the other, from exhilaration to disappointment, from triumph to failure, from fulfilment to defeat.

To be honest, I haven’t suffered too much from these highs and lows – unlike some people I knew who stayed there longer and ended up being crushed by them and in some cases reduced to poverty, isolation, drug addiction or suicide. My immunity to this danger was the silver lining of my status as an outsider: I always had a return ticket in my pocket, a family waiting for me on the other side of the pond, some clients in Paris for whom my prestige was heightened by the fact that my work was published in the US. And in New York, after a studio session, or an evening at the lab looking through my contact sheets, or a meeting with editors to present my latest work or to discuss the next, I came back out into the streets, which looked just as I remembered them from my first evening, and the euphoria I had felt then was still in the air.

Like certain moments that at the time I didn’t even think of capturing on film, but that live on in my memory. The chess players at their improvised tables on a Broadway sidewalk, surrounded by an audience of kibitzers of all races, in the middle of the flood of passers-by and the din of car horns. Or the guy delivering hot food, whose van is stuck in the traffic jam of a cross-town street, and who realises that his delivery will be hopelessly late and his meals destined for the bin, so he decides to hand them out to other drivers in the jam, to any pedestrian who wants some and even to the shop-keepers in their doorways, amid much back-slapping and general hilarity. Or the gogo-girl, kneeling on her counter, spreading her thighs and stroking her nipples for the thrill of the client sipping his beer a few inches from her crotch and slipping dollar bills into her g-string (all other physical contact being strictly prohibited), while, at head height, the two have an anodyne conversation about the latest baseball match, the weekend weather or the price of second-hand cars. Because New York is the opposite of the inhuman metropolis, as imagined by those who have never set foot there. It is, on the contrary, one of the few places on earth – and possibly the only one – where homo sapiens seems to have successfully mutated into homo urbanus. With rituals, reflexes and unwritten laws, allowing fifteen million people, who have come from all corners of the planet (or whose parents or grandparents came from there) to live together in a restricted space, in conditions that are often uncomfortable, but without becoming too prone to ripping out each others’ guts – and sometimes even sharing a joke, a small gesture of support, or the hint of a physical contact that is not necessarily licentious.

The extracts that I am reproducing below are not from a regular diary (such as Weston’s Daybook), but from a bundle of notes, begun on the day I embarked on this project and with the sole aim of keeping a record of its progress. I knew from the beginning that it would be just as important to me as those about trees and about women, because New York took up just as much room in my imagination. But I didn’t know that it would become – in addition to that – a research about colour. And I suspected even less that in the course of it I would come to feel the highs and the lows of New York in my own body, or to be more precise in the anatomy and the physiology of my cornea and my retina.