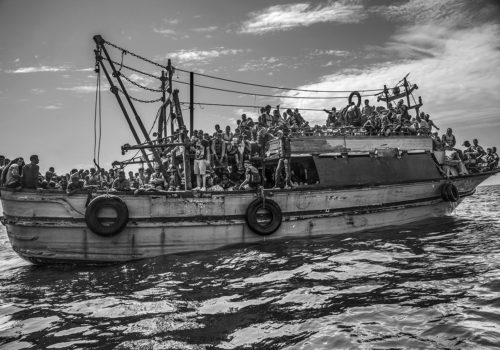 Sylvie Rebbot, who was the director of photography for Geo and is now one of the collaborators of the Eye of Photography, has just sent us these images and this text by Francisco Zizola. It is true that on this daily tragedy, we hardly communicate any more.

To the horror of the facts is added the horror of silence. So, let’s take the time to listen to Francisco talking from his heart and thank you Sylvie!

In 2015 Francisco Zizola was on board The Bourbon Argos and a Team of Doctors without Borders to document the rescue of over Three thousand migrants. Since then it is estimated that 20 000 migrants died trying to cross the mediterranean sea. For the few that are rescued thousands drown in unseaworthy boats with little or no equipments in a very dangerous sea. Our newspapers sometimes show a picture as the one published threee weeks ago of an upturned rubber dinghy that was taken from a boat that arrived too late to be of help, that week 120 people died

In the Same Boat

As I write these notes, about 3 inflatable boats with hundreds of people on board are sailing in the channel of Sicily towards Italy. They have reported their position to an NGO that sends the coordinates to the rescue units with the aim of saving the lives of the passengers of the boats in difficulty.

Ten days ago, on a day with weather conditions similar to today, a boat that had been launching repeated sos for hours, was lost track of. The government authorities that manage emergencies at sea (Italian, Maltese and Libyan coastguards) had reacted to the continuous alarms with about 20 hours (sic!) of delay and the merchant ships that had heard the messages and were in the vicinity had not dared to approach in order not to risk the seizure of the ship by the authorities. After 24 hours, a lookout of the Italian coast guard reached the place indicated in the last desperate message launched by the passengers of the boat and found only about twenty corpses, those wearing a life jacket or an inner tube of a tire; the others, about eighty, including women and children, are presumed to have drowned and are in the deep sea.

Since the Italian government discontinued the search and rescue operation called Mare Nostrum in 2016, the largest recorded tragedies in maritime history have occurred in the Mediterranean. Thousands of human beings are left to drown or left in the hands of the officials of the Libyan coast guard, paid by Western governments to discourage departures and bring back the migrants caught at sea for imprisonment and torture.

In the meantime, the whole machine of institutional power has put in place a huge operation of disinformation that portrays migrants as profiteers and thieves (of our women, our jobs, our private property) and cloaks itself in hypocritical solidarity by allocating some money to phantom projects of “aid” to the countries of origin of the migrants.

All the investigations that highlight the obscene reasons for our real geopolitical and economic interests in the areas affected by the waves of migration towards Europe have disappeared from the news and in-depth programs.

Nothing is said, for example, about the robbery of fish resources in the richest fishing coastal areas of West Africa, that of Senegal, by European fishing boats, except to then criminalize the African immigrants who come from those areas, having fled poverty and hunger. It would also be possible to mention one of the reasons for the conflict that has been bloodying the Congo for decades, the presence in its subsoil of mineral riches that are unheard of but very well known to western multinationals that exploit them without even paying the rights to exploit those riches by using local labor that is often underpaid or unpaid.

And so we could go on with enlightening examples that tell a story of fierce and hypocritical neo-colonialism. The problem of information is also crucial today because in order to continue to perpetuate economic and financial domination over the world, the constituted powers make use of an instrument that has proved to be strategic: Democracy. Today we are all inhabitants of the Western world who vote and allow our rulers these atrocities. We do this because information is controlled and any independent or critical voice is discouraged, indeed it is criminalized and annihilated until it disappears. Before our eyes, Europe is turning its head the other way and is committing a failure to help human beings whose only fault is to try to survive the economic and cultural desert into which the West is transforming the world.