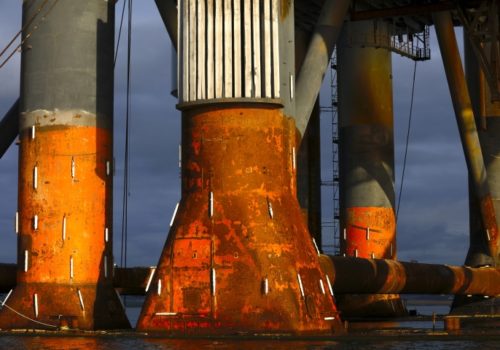 While Brexit relaunches the debate on the independence of Scotland, it is towards its shores that invites us Francesca Piqueras with the series “Quiet Territory” that she presents Galerie de l’Europe (Paris), from February 18. The oil platforms and the ruined military devices she has taken as her subject appear here to be immemorial monuments. As if they were an extension at sea of ​​the wall that Hadrian had built to isolate from the Roman Empire this territory with a unique destiny.

For this series “Quiet Territory”, Francesca Piqueras is interested in three types of maritime structures:

– those found on the maintenance site of Cromarty oil platforms, where she had already been there ten years ago;

– training targets for the Royal Air Force bombers, built in 1937 at Luce Bay, and now abandoned;

– the remains of the anti-submarine barrier built during the Second World War between the Isle of Cramon and the Scottish shore.

These concrete and steel structures allow Piqueras to play on paradoxes. First of all because they are emblematic of the industrial era, they seem to have come out of the depths of the ages here. The platforms evoke totems erected to the glory of a few marine deities.

The rows of Cramon pyramids echo the alignments of Luxor Sphinxes. The targets at Luce Bay are reminiscent of these megalithic standing stones, which are also found in large numbers in Scotland.

Another paradox on which the photographer plays: if these platforms and these vestiges mark the close links (military, economic) of Scotland with the rest of the United Kingdom, they seem here to delimit and isolate the “quiet territory” that we sees in the background of his photographs. As if these structures were elements of a single immemorial barrier, which would extend by sea the wall that Hadrian had built to isolate this land, ancient Caledonia, from the Roman Empire.

In her first series on maritime structures, the vanishing point of Francesca Piqueras’ photographs was the sea horizon. Her purpose was then essentially to highlight the fragility of human works in the face of natural elements. The change she is making here and which she initiated in her series “In Fine” (2018), taken in Siberia, marks literally as figuratively a change of perspective.

Her photographs are less meditative, more frontal. The relationship with the elements and with light is both more naturalistic and more nuanced. If her work reaches a point of maturity by continuing to question us about human destiny through its artefacts, it is no longer a question of confronting them with the marine element but with this shore which now appears in the background.

For Australian Aboriginals, every bit of land has been inhabited from the start by a dream. What dream does this territory live to surround itself with such marine monuments?