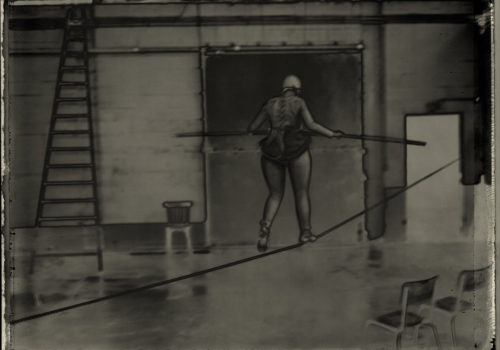 French photographer Sarah Moon (b. 1941, Vernon, France) is one of the medium’s few living legends. Curated by the artist for Fotografiska, the exhibition At the still point showcases a selection of photographs, films and books produced over the last 30 years.

A fashion photographer with a deep literary approach to her work, Sarah Moon has the incredible ability to create dream- like, otherworldly photography in both her editorial work and more narrative series. Her distinctive painterly, storybook- esque visual style transports the viewer to a world, where the lines between reality and fantasy blur among deep color tones, melancholic moods, and abstract shapes.

Highlighted within At the still point is an installation of 46 photographs and 6 fictional obituaries around a film: The Red Thread, based Bluebeard, or La Barbe Bleue, a French folktale by Charles Perrault published in 1697.

Sarah Moon began her career as a fashion model in the 1960s. Since 1968, she has worked as a fashion photographer and filmmaker. Her photographic work has been published in Vogue, Elle, Harper’s Bazaar, Marie Claire, and numerous other magazines. Her books include Little Red Riding Hood (1986), Vrais Semblants (1991), Photopoche (2002), The Red Thread (2005), Coincidences (2001), 1,2,3,4,5 (2008), PasséPrésent (2020, catalogue of the exhibition at the Musée d’Art Moderne  de Paris). She has directed several films, including one feature film Mississipi One (1991), one medium-length feature 5h-5 (2012), 5 short films inspired by the folktales of Hans Christian Andersen and Charles Perrault, and documentaries on photographers and on photography (There is something about Lilian, Le Montreur d’images, Contacts…). Sarah Moon won the International Center of Photography’s Infinity Award for Applied Photography in 1985 and the Grand Prix National de la Photographie in 1995 in France.

Sarah Moon : At the still point