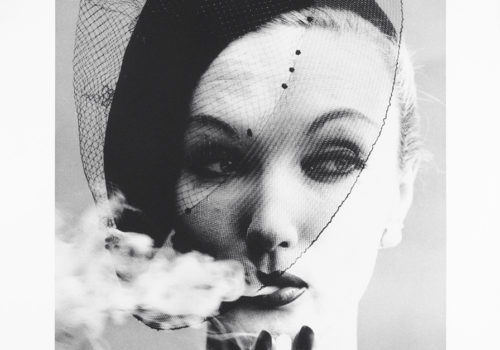 FIFTY ONE TOO presents a series of 9 platinum prints by the influential American photographer, filmmaker, graphic designer and painter William Klein (born in 1928 in the US, who lives and works in Paris, France). The exhibition features some of the most well known images that this ‘enfant terrible of photography’ made on assignment for Vogue magazine in the 1950s and 60s that are now considered a milestone in fashion photography. The platinum printing process – known for its exceptional quality, durability and beauty – gives these legendary photographs an unprecedented depth, sharpness and tonal range, spectacular to discover in person.

William Klein is best known for his primitive style of photography that ignored all conventions. His self- proclaimed ‘fotografia povera’ made a trademark out of graininess, blur, distortion, sharp contrasts and unexpected points of view. The movement, immediacy and acceptance of accident in Klein’s snapshot-like images, stand in sharp contrast with the rigid fashion photography of the 1950s and 60s with its mainly studio-based way of working. However, in 1954, Klein would accidentally end up as a fashion photographer when he was approached by art director at Vogue, Alexander Liberman.

Liberman agreed to finance his planned photographic portrait of his hometown New York, with the intention to publish a portfolio in the magazine. Although the images would never make it into the pages of Vogue – they instead evolved into the iconic publication ‘Life is good for you and good for you in New York: Trance Witness Revels’ – Klein returned to France with a contract for a loosely- defined position at the magazine’s art department.

As a fashion photographer at Vogue, Klein learned technical skills such as using studio lights and advanced cameras, and had several assistants, sets and locations at his disposal. Although this gave him the opportunity to gain knowledge and try out new things in a completely different framework – experience which he could then use in his personal work – Klein always held an ambiguous position with regards to his career at Vogue and the fashion world in general. He admired the technical perfection of his contemporaries Irving Penn and Richard Avedon, but he generally found fashion photography to be boring and unimaginative. The fact that his iconic portrait of a smoking Barbara Mullen – a hat shot for French Vogue of 1956 – originally troubled the magazine editors because her cigarette was not in a holder, testifies to how conservative fashion still was at the time. When in 1966 Klein made his first full-length film ‘Qui êtes-vous, Polly Magoo?’ it was clearly a satire based on his experiences in the fashion industry, including a persiflage of Diane Vreeland, editor-in-chief at Vogue since 1962 and described by Klein as a ‘fashion fundamentalist’. Strangely enough, Kleins career at Vogue would only end a few years later, in 1967, as a consequence of his involvement in the anti- American labeled film ‘Far From Vietnam’.

Being an artist who has always had an underlying criticism of capitalism and consumerism and its influence on people’s daily lives, it comes as no surprise that Klein considered photographing a dress as rather pointless. Once used to the idea however, he enthusiastically embraced the fashion platitudes and revolutionized the genre with his energy and bold ideas. He took the models out of the studio to photograph them in semi-realistic situations – like densely-trafficked Manhattan avenues or in front of empty shop facades – that contrasted with the haute couture they wore. “I preferred these make-believe ladies to have problems – dragging mirrors around through traffic, unable to get cabs,

… What I ended up doing, often, was a parody of fashion photography and its poses, getting the model to exaggerate the cliché chi-chi attitudes.” Klein also introduced a number of technical innovations, among which the telephoto lens, which he used for one of his most well known fashion images, taken on the Piazza di Spagna in Rome in 1960. Letting two models walking up and down the crosswalk with himself out of sight, photographing high up on the stairs, the passers-by were not aware that the girls were part of a photoshoot. The shoot eventually had to be stopped due to the commotion it caused, but the image itself became an icon of fashion photography.

Gallery Fifty One Too