Fifty One : Katrien De Blauwer : she won’t open her eyes 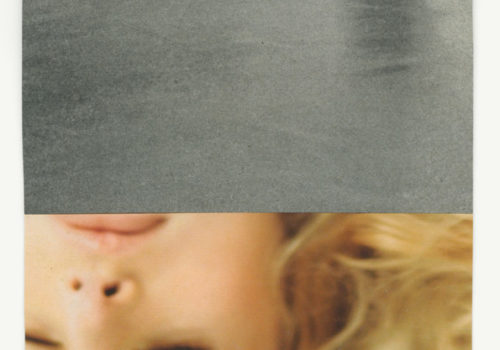 In her third solo exhibition at Gallery Fifty One, Katrien De Blauwer (Belgium, 1969) takes the viewer on a journey between dream and reality. With ‘she won’t open her eyes’, the artist adds a remarkable concept series to her oeuvre, filled with formal experiments that mark a shift in her imagery.

The work of Katrien De Blauwer is always partly autobiographical. Although she uses material taken from vintage magazines and turns it into anonymous and universally recognisable images by cutting out the faces, she reassembles and appropriates this found imagery into a new, very personal narrative that is far removed from its original meaning. Created in a spontaneous and intuitive manner – mainly guided by her own emotions – De Blauwer’s photomontages depict her personal life story and memories. In a same way, the series ‘she won’t open her eyes’ found its roots in a personal experience, arisen in a period in which the artist experienced a lack of sleep and started to reflect about the concept of sleep and dreams. A book she read at the time – ‘The House of the Sleeping Beauties’ (1961) by the Japanese writer and Nobel prize winner Yasunari Kawabata (1899-1972) – would eventually become the starting point of this new exhibition.

The novel tells the story of the old man Eguchi and his visits to a house where he can spend the night lying next to a sleeping girl. Descriptions of Eguchi’s actions alternate with the dreams he has in his sleep. The innocence and youthful virginity of the sleeping young girls contrasts with the experienced old man, who struggles with his memories and age. Just like Eguchi encounters a different sleeping young girl with every visit he pays to the mysterious house, De Blauwer invites the viewer on the ground floor of the gallery to enter several rooms, each containing one or more ‘Sleeping Beauties’ surrounded by their dreams. By doing so, she shifts the focus of the story to the point of view of the (sleeping) girls instead of that of the old man. The sleeper is physically present yet mentally absent, finding herself in another time and reality. The moon glooms over her, with a reassuring but at the same time ominous presence. The beauty and the sensuality of the sleeping young girls – with their bare shoulders, elegant hands and silent lips, so characteristic of De Blauwer’s work – contrasts with their often disturbing and unsettling nightmarish dreams. In the latter, movement and comforting nature scenes (animals, mountains, birds, the sea, …), are interspersed with feelings of longing and (the incapacity of) wanting to break out. Although it’s difficult to grasp the ephemeral twilight zone of a dream in which everything fades and mingles, De Blauwer brilliantly succeeds to convert this into striking imagery.

While the ‘Fake Polaroids’ on the upper floor of the gallery focus on separate dream fragments and remind the viewer of the purified compositions for which De Blauwer has been known lately, the dreams on the ground floor are composed of several fragments. In accordance with the different stages of sleep, they come together in a somewhat confusing, stormy narrative that challenges the viewer to look attentively to fathom the story. The way in which multiple image fragments from different contexts are brought together in a narrative whole renders the Dreams very cinematic. References to film are always present in De Blauwer’s work. Not only because of the nouvelle vague- like atmosphere that permeates her work, but also because of the way in which – like a photographer or film-director – the ‘cut’ of her scissors determines what is left visible of a certain scene. With this technique – similar to that of the photomontage or film editing – the artist creates a kind of off-screen event, which was cut out of the frame but is still tangible, bringing about an alienating sense of emptiness and separation. Finally, the montage of several images also have a strong affinity with the ‘notebooks’ the artist has kept since her adolescence. Filled with diverse image – and text fragments and quotes taken from books, newspapers and magazines, the notebooks are a record of De Blauwer’s ever going research. It brings together various influences from literature, art, music, fashion, etc. that eventually trickle through into her work. An example of such a notebook will be on display in the exhibition.

Gallery Fifty One
Zirkstraat 20
B – 2000 Antwerpen