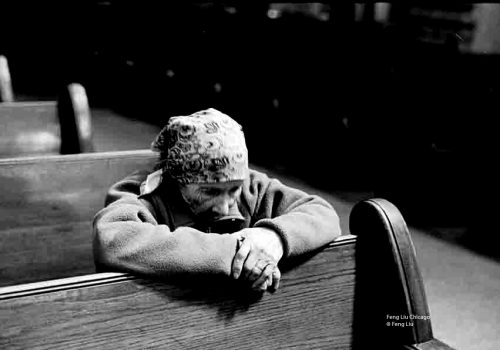 Feng Liu is an American photographer who lives in Chicago. He is one of the oldest readers of the Eye of Photography. Taking pictures is his reason for living. He makes dozens of photos per day. A year ago, he created his blog. Here is the story of a passion.

In 1999, I moved to Chicago from Shanghai, China. I was immediately captured by its colorful culture and people. I was totally stunned by its vitality and power, which I had never seen or imagined before. There was a strong urge inside of me which wanted to express my feelings and reaction to this great city. I started to use my lifelong passion, photography, to document what I saw, what I felt and what I thought even though my first job in Chicago was as an engineer.

The city of Chicago is truly a big melting pot. Everywhere you look, you can see people from almost each corner of the world; everywhere you go, you can find evidence of individual ethnic customs or traditions. Each culture and custom are well respected and preserved. Yet, in the midst of diversity, I saw similarity: love of freedom and opportunities, warm, being kind and generous, outgoing and carefree, honest and straight, dedicated and resourceful. Different cultures shaped the city of Chicago, which in turn, modified each ethnic group in the city.

Chicago is also a miniature of the great America. It has 125 different neighborhoods, a successful example of harmony and of diversity. Since 1999, I started to photograph Chicago and its people, from a wedding party passing through Michigan Avenue to a restaurateur delivering boxed food to homeless under bridges; from cityscape to city parades and festivals. On a quest to create a lasting record of life in Chicago in the millennium year, I spent almost every day canvassing the city and chronicling its people, places and personality. I tried to use my photos to blend into a rich, historic document that will inform those in the future long after it teaches us about ourselves. A city is constantly reborn. It lives, it grows, it dies, and it is born again. I worked for CITY 2000, a prestigious photo project that documented Chicago in the year 2000 as a pure street photographer. I used Kodak Tmax black & white film and a Nikon FM2 camera. I shot about 10,000 photos in that year alone.

However, I only told a small portion of the story. The photos are a first remembrance of what will hopefully be a thousand-year-long trail, a living record of one year in the life of one great city-Chicago. I hope these photos are a message to the future.

I have also created several special projects for myself. One is photographing Chicago baseball Cubs fans. For four years, I attended almost every Cubs game—focusing on the fans instead of the game in an attempt to answer the mystery of why this historically losing team has such a huge following. I also covered the Cubs winning the World Series. This was the biggest event in Chicago history. There were about 5 million people who came to downtown Chicago for the victory parade.

I don’t have any formulas in my head or so called “rules”. I really enjoy Henri Cartier-Bresson and Robert Doisneau’s work and they really inspired me. I enjoyed the moments when I click the shutter and connect to people and the scenes. Eighteen years have passed and I am still doing the same street photography in Chicago almost every day.  I still feel I am an outsider here, so I look at things differently and maintain a fresh perspective. This is critical to me. Since I switched to digital, my shooting amount has dramatically increased. So far, I have shot more than half a million photos of Chicago.  I feel lucky that my eye is able to see the pictures in the street. I just can’t stop taking pictures. To me, photography is a no end journey.  My work was exhibited at the Chicago Cultural Center and the Water Tower and published in the CITY 2000 book and Chicago Tribune. The University of Illinois at the Chicago Library has collected more than 8,000 of my photos.

I like what Jack Kerouac wrote in the introduction to Robert Frank’s “The Americans”, “As a picture–the faces don’t editorialize or criticize or say anything but This is the way we are in real life and if you don’t like it I don’t know anything about it because I’m living my own life my way and may God bless us all, maybe” … “if we deserve it”…