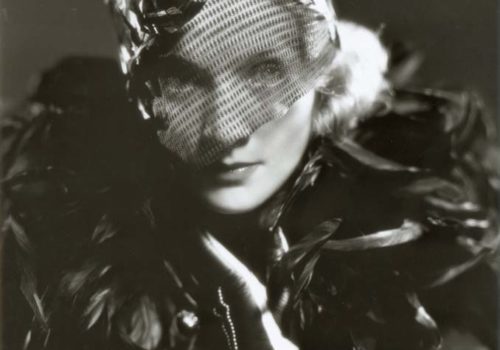 Eugene Robert Richee headed Paramount’s portrait studio from its inception and he worked with a talented coterie of associates including William Walling and Don English. Richee remains the least examined among the top Hollywood photographers although he was one of the finest – one needs to look no further than his sensational portraits of Paramount stars Anna Mae Wong , Clara Bow , Louise Brooks and Marlene Dietrich as evidence. Even a tireless researcher like Kobal had difficulty uncovering biographical information about Richee and it is only after Kobal’s death that a few details have emerged about Richee’s life including his 1896 birth in Colorado. He started at Paramount in 1921 and stayed for twenty years after which he left he left to take a job at Warner Brothers. Richee died in 1972 just before Kobal began exploring seriously the careers of Hollywood portrait photographers. Like Ruth Harriet Louise, Richee left scant biographical information behind but, again like Louise, he left a corpus of extraordinary work that may be seen as emblematic of the best of Hollywood photography.

Richee was an inventive photographer and when working with starlets he sometimes incorporated props made of plastic, glass or even mirrors, giving his prints a sparkling reflective quality. Portraits of the top stars always had a sheen that was consistent with the studio’s image of smart sophistication. When he photographed Clara Bow, the studio’s number one sexpot took on a polished veneer. Richee has the distinction of being the first photographer to record Veronica Lake and her distinctive blond locks in his portraits for I Wanted Wings (1940), the film that brought her worldwide fame.

Perhaps Richee’s most famous work is a 1928 portrait of Louise Brooks wearing a long string of pearls. Few photos capture better the zeitgeist of the Roaring ’20s.  Simplicity is the hallmark of this photograph along with a masterful composition. Brooks stands, face in profile and wearing a simple long sleeved black dress, against a black background, her face, hands and pearls alone illuminated. Her bob with its razor sharp line across the white skin of her jaw was widely copied and became one of the last century’s most potent fashion statements. Brooks’s career had intermittent highs and lows but she was one of Hollywood’s great portrait subjects and was never better served than by Richee.

At the top of his game and for reasons unknown, Richee left Paramount in 1941 to go to Warner Brothers and later worked for MGM.