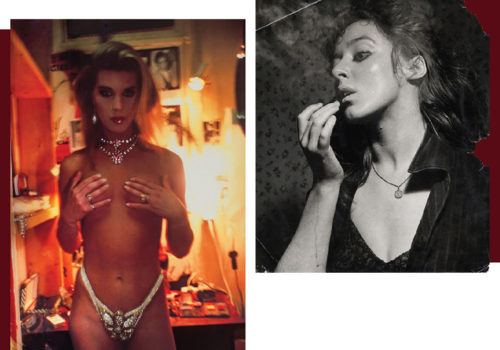 This is the thirteenth dialogue of the Ettore Molinario Collection. A dialogue dedicated to that painful, yet conciliatory gesture, which is the tear. On the ragged edge of one of Vali Myers’ most intense portraits, Ed Van Der Elsken and Nan Goldin meet. And by mending the stories of these two extraordinary rebels and the communities in which they lived, I invite you to follow our next appointments.
Ettore Molinario

That gesture tells everything, the vocation to a subjective gaze, extraordinarily autobiographical in revolt, in suffering, in the search for authenticity. And the emblematic gesture is the tear that reinvents and makes unique the portrait of Vali Myers, alias Ann, protagonist of Love on the Left Bank, a revolutionary book by Ed Van Der Elsken, who in the 1950s explores the youth revolt among cafes, pavements, the caves of the existentialist Saint-Germain-des-Prés, in Paris. The story is enlightening: Gerd Sander was very fond of Van Der Elsken’s work; the two had met, Sander had expressed his enthusiasm precisely for that image and without a second thought Van Der Elsken had torn the print from the album which contained it and had offered it to the gallery owner and nephew of the great German photographer.

If Gerd Sander, also a very refined printer of his grandfather’s work, jealously preserved this imperfect image according to the classic criteria of conservation, if Julian Sander presented it at the latest Paris Photo in the exhibition-homage to his father, who passed away the year last, and if today this image is part of a collection that has in its DNA the uprooting from the norm and the exploration of the underground, it is precisely because this image, on the edge of laceration, has the power to tell and bring together many lives.

Of course it is the life of Ed Van Der Elsken and his community living on the sidelines of the law, with which he identifies and grows as an author – «I want to photograph people like me» said the Dutch photographer – and of which he narrates loves, violence, births, sex, disease, pain, illusions, death. And of course thirty years later in this «tribe», as Vali Myers called it, found herself Nan Goldin, soul of The Ballad of the Sexual Dependency, exhibited for the first time in Arles in 1986, she who considered Ed Van Der Elsken «a lover or a brother» at her side in the dive in the Bowery, among the protagonists of the New York underground. In place of Vali, Cookie Mueller, Trixie, Susan and their companions appear. Living, shooting and self portraying is the only rule, and even after moving to Paris, Nan Goldin enters and lives in the happily contested community of Le Carrousel, and in the capital’s most famous cabaret en travesti she portrays her star, Kim Harlow, posing in the dressing room. Again it is a hugging look, a new family, again it is finding yourself at the center because at the margins, again it is courage, freedom. Miracle of the hands that tear, caress, dance, mend.
Ettore Molinario
www.collezionemolinario.com

Bande-annonce, The Pigozzi Collection in Cannes

Roger-Viollet Agency : We walked on ice !