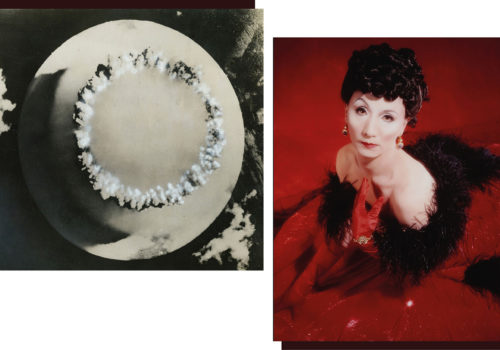 This the seventh Dialogue of the Ettore Molinario Collection. A dialogue among women who write their destiny. A dialogue between winners and losers, between the United States and Japan, between the heroine of Gone with the Wind, Scarlett O’Hara, alias Vivien Leigh, and Scarlett O’Hara herself played by Yasumasa Morimura. I invite you to find yourself in this game of mirrors and to follow us in the next appointments.

World War II had ended the year before when the US government dropped two atomic bombs on Hiroshima and Nagasaki on 6th and 9th August 1945. In the summer of 1946, in the blue Bikini Lagoon in the Marshall Islands of the Pacific Ocean, the United States detonated another bomb. A test, this time, to verify the effects of nuclear power on ships anchored around the atoll. Sailors and commanders remained at a safe distance. A few minutes before the explosion they had received the order to drop a blackout mask over their eyes and had waited for the signal. At 08.35 they had seen the bomb explode, placed under a landing ship; between the ocean and the sky suddenly an immense cloud had risen, an inflorescence that an operator, flying over it, had caught in its deadly rising. So white, so soft, perfect and then that crown that drew the last royal circle, the moment before it dispersed in the air to become a dark column.

When fifty years later, in 1996, Yasumasa Morimura wore one of the most famous dresses in the history of cinema, the red-sin, red-passion, red-pride, red-I dress by Scarlett O’Hara in Gone with the Wind perhaps he could not imagine that he was interpreting the very essence of the history of modern Japan. It is not only one of the most famous images of the Actress series, portrait and self-portrait of an artist who comes out of himself to become someone else, but the Vivien Leigh of Morimura, the Scarlett of Tara, the sweetheart rejected by Ashley, the ungrateful wife by Rhett Butler, is the face and body of a country that has lost the war and has chosen, by «americanizing itself», to wear the uniform of its invader. Who else is Scarlett O’Hara if not the woman who loses the Civil War? What is that red-death dress, with that cloud of feathers that envelop her shoulders and breasts, if not a premonition of the nuclear war that will be? And who is Morimura-Scarlett if not a loser, a Japanese born six years after the end of the Second World War, and who nevertheless accepts the radiations of American culture and its actress-bombs? «Tomorrow is another day» said Scarlett. Who knows what part of me will survive tomorrow.