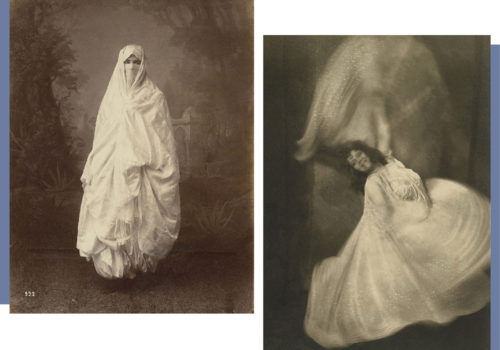 This the sixth Dialogue of the Ettore Molinario Collection. A dialogue among women who write their destiny. A dialogue between two photographs that mark the transition between the nineteenth and twentieth centuries. I invite you to enter this vortex of light and to follow us in our next appointments.

She is the butterfly, she is the fire, she is the light, she is heaven and the stars. She is Loïe Fuller in the words of her lover, Gab Sorère. Loïe is a woman who loves women, and in the whirlwind of silk veils that surround her she is a creature in the making, the woman who is becoming the new woman of the late nineteenth century. Before then no one had ever seen desire and pathos take such free and exuberant forms, almost already abstract. And before Fuller, no artist had made of herself her total, scenic work of art, where the fabric dotted with fluorescent radio, with which Loïe was dressed, dictated an unprecedented story of freedom in the dark. The Art Nouveau of self-determination.

Loïe Fuller, then Marie Louise, was born in 1862 in the most remote American province. As a young girl, she had moved to New York singing and dancing in vaudeville, later she had reached Paris and at the Folies Bergère, after three hundred replicas of her Serpentine Dance in 1891, she had created modern dance. In the wake of that bright success, Loïe had inaugurated an all-women company, had opened a school and had formed a team of fifty electricians who moved behind the scenes of every show of hers.

In the years when the electric light was turning into a daily presence, Loïe had sensed that the inner light could change the female destiny. Just turn it on and everything starts to swirl, to come to life. Just turn it off, yesterday as today in every part of the world, in Afghanistan once again in the hands of the Taliban, in the violence of the very modern west, and the veils and the light they are impregnated with will censor the energy instead of freeing it. They erase the body instead of erasing the night.