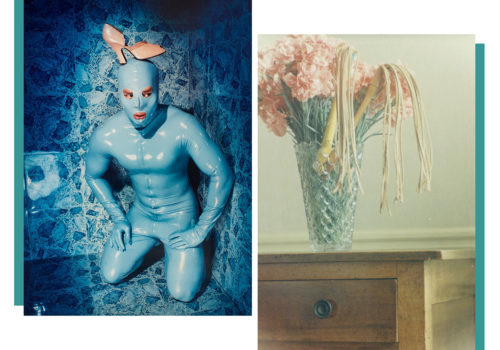 This is the third Dialogue of the Ettore Molinario Collection. In juxtaposition a still life of Zorro, the mysterious genius of anonymous photography, and an image from David LaChapelle’s Shoe Story series. I invite you to discover the bond that unites these two masters of fetishism and to follow our new appointments in the coming summer months.

He had chosen those pink flowers to set up the most delicate and cruel homage to himself, to the man he had been and, because of his age, he no longer was. And among all possible colours he had chosen pink. He, who for years had imagined himself as Zorro’s alter ego, who had dressed in the same boots and cracked the same whip, because he knew how much pink, still in the eighteenth and early twentieth centuries, had been the colour of virility, the polite and aware red of those who know strength, passion, justice.

For at least two decades Zorro, an extraordinary anonymous photographer, had dressed the clothes of the masked swordsman. Each dressing had taken place at home, in the bedroom of an old Paris apartment. In the 1940s, self-portraits were in black and white, nocturnal. The colour and the warm light of the day, on the other hand, announced his maturity, and in 1968, the ’68 of all rebellions, taking leave of his fantasies, Zorro had inserted his beloved whips in a vase of carnations. Ikebana of a farewell.

Thirty years later, David LaChapelle also wanted to ride in the domestic prairies of desire. He too became Zorro and let the executioner’s leggings wrap up his body. Blue latex, because the sky today is chromatically destined to men. If only this were the case, we would have to protest, but that little powder shoe, resting on the head, balances the game of conventions and reminds us that the colour of the ancient male power is the same colour that now belongs to women.