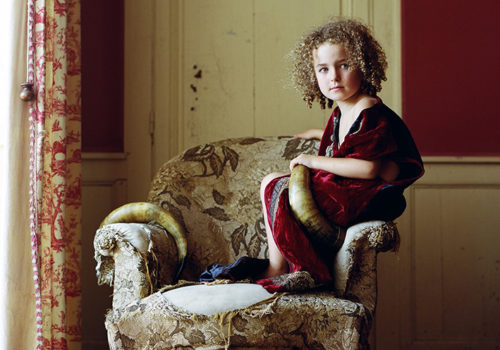 All of Estelle Lagarde‘s work is a question of plural paths.

It is from the encounter with an architecture, the apprehension of a light and a certain flow of time that the artist’s photographic narratives are born, echoes of her own questions which in turn become ours.

Her photographic staging questions the appearance of our existences in order to better explore our inner lives. They probe in a dreamlike way, sometimes with humor or discrepancy, the challenges, large or small, of our lives. The specificity of each of the theaters of her shots corresponding to a particular question.

Each antic frame carefully chosen by the artist to enclose her photographs introduces and concludes the scene offered to us, as the red curtain unveils and ends a show.

In dilapidated spaces, crossed by both human and ghostly presences, Estelle Lagarde plays between comedy and reality. The places she captures are real, taken in their raw state. She makes this spatial reality her scene, which she plunges into a dreamlike and disturbing atmosphere whose only positive outcome is light. Diffuse and diaphanous light, chiaroscuro that suggests a way out into the future …

The characters encountered by Estelle Lagarde in Au Château (“At the Castle”) seem to be the consenting prisoners of this place.

Away from the turpitudes of the world, they have experienced a development that is unique to each of them.  Humans becoming a plant, an animal, remain frozen in time, condition, a part.

A familiar feeling comes over us. The protagonists are known to us, from history, literature, theater … And yet something new is happening. A shift.

Lock-in and isolation have both stopped their possibility of emancipation but also brought about strange changes or behaviors.

All this little world seems to be governed by rules that escape us. They slide in silence, in whispers, in contained laughter. Ready to disappear, to blend in with wood moldings, in stones, to borrow back doors.

“Au Château” is a living, independent cabinet of curiosities.

The different places occupied by Estelle Lagarde allow her to direct scenes which, added to each other, tell a story.

The different places occupied by Estelle Lagarde allow her to direct scenes which, added to each other, tell a story. With “De Anima Lapidum” Estelle Lagarde engages in the materialization of an interiority. By placing her camera in several religious buildings in the four corners of France, she brings into images a reflection on the relationships established between humans and the architectures of these monuments.

It is also our own mystique that is probed here through the recollections, the memories and the history that permeate the walls of these sacred monuments, witnesses and keepers of secrets, sins and hopes.

From small country churches to majestic cathedrals, and even to the Royal Monastery of Brou, Estelle Lagarde takes a unique and inspired look at what arouses and triggers in us these often millennial architectures.

In the company of strange characters, she offers us a journey between contemplation, dreams and meditation.

If “De Anima Lapidum” does not constitute a break in the work of Estelle Lagarde – it is almost always architectures that inspire her photographic staging – this series is nevertheless very special.

While the previous images focused on the human presence, on its trace, in constructions on the verge of being destroyed or rehabilitated, those of “De Anima Lapidum” were designed and produced for and in immutable places, whose destination is almost eternal: churches, cathedrals, monasteries are here at the heart of the artist’s questioning. These monuments are both the trigger and the receptacle for this research.

One day, while entering a church, Estelle Lagarde saw this man on horseback. It was by probing this vision that the desire was born to confront these eminently enduring places, witnesses of history with a capital H, but also of so many human, intimate and unique stories.

It is these temporal and memory layers that the artist examines and materializes.