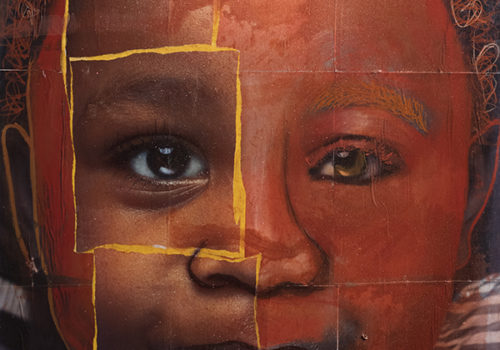 Arnika Dawkins Gallery presents #InHonor: Monoliths, a  series of portraits by Savannah College of Art and Design Master of Fine Art recipient Ervin A. Johnson during Atlanta Celebrates Photography 2019. #InHonor: Monoliths features work created by the artist and is his creative response to the Black Lives Matter movement. The Black Lives Matter movement describes itself as a “call to action and a response to the virulent anti-Black racism that permeates our society”.

Throughout history artists have responded creatively to their time; and at times are dialed in to a different level of sensitivity to what is going on around them. #InHonor: Monoliths explores notions of confrontation, forthright exploration and seeks understanding surrounding destruction of lives due to police cruelty.

#InHonor: Monoliths is a continuation of a series of portraits created to honor Blackness. Johnson states that, “this body of work speaks to the racial violence and discrimination currently occurring across America, particularly in the form of police brutality”. He further describes that the faces in “#InHonor: Monoliths reference validation, representing not only individuals, but in a deeper way the face of humanity. The stunning mixed media portraits speak to the pain of individuals and more broadly to the Black experience. Johnson created #InHonor: Monoliths to exist in the public realm. The hashtag in the title is not only a purposeful nod to the viral nature of social media, but also an acknowledgement of the part social media has played in seeking justice in recent tragic events.

Johnson’s process is informed by the abstract expressionist movement; paint is introduced to the photographic material in a metamorphic way as a stand in for physical and mental abuse done to black bodies. However, Johnson states, “the focus is not on the destructive nature of racism as a physical manifestation in the work. That is to say, “destruction” occurs more subtly as the work has evolved. Removing pigment and adding back from the photo on the first layer, in a not so accurate way becomes a commentary on the mishandling of the black body and also how because “Blackness” is oftentimes viewed as monolithic. Colors used in the second layer aren’t specific to each individual. By adding the pigment back by hand I care for my brothers and sisters and forge for them a new existence, which is typical of the black experience, making something out of nothing.”

Ervin A. Johnson, is a native Chicagoan, he utilizes photo-based mixed media to reimagine his cultural and racial identity through photography and video. Johnson completed a residency with Columbia College Chicago, is a PhotoLucida Critical Mass Finalist, Diane Dammeyer Fellowship Recipient and will complete a residency at The Center of Photography Woodstock. His work was featured in an exhibition in Detroit’s Wright Museum and can be found in numerous private collections. His photograph #InHonor: Shoccara is currently on view in Personal Structures – Identities with the European Cultural Centre during the Venice Biennale 2019. Arnika Dawkins Gallery is devoted to presenting fine art from both emerging and established photographers, specializing in images created by artist from African Diaspora as well as images of people of African descent. Launched in 2012, the gallery’s objective is to provide an educational platform that supports this burgeoning community of artists.