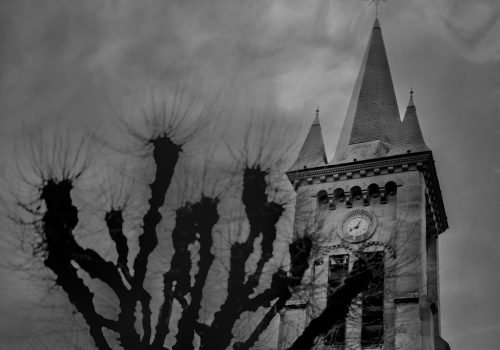 Eric Bouvet is a formidable photographer. One of those who are perpetually in search of the testimony. Watch this very astonishing reportage which he has just finished in Oise, one of the paradises of the Virus and which was published in Le Monde. We must hope that very soon he will receive public or private funding for this work in the making, which is at its most insane moment in our history!

L’Oise is close to Paris, but in a rural area. The disease affects everyone, the countryside as well as the city. Its geographical accessibility and the layout of places, towns, villages, logically made it a road trip. This remains an investigation, a work focused on this eastern part of the department, where the virus is spreading. L’ Oise was the first department affected with its first French death. And today it is the department with the highest number of deaths: 10.

Each site is directly related to the virus. Lamorlaye church is closed.

The ephad of Crépy en Valois also affected by the virus with deaths as in several retirement homes. Vaumoise, place of residence of the first French death where the mayor requested that the elections be postponed…

About the large format camera

The use of the large format camera and the choice to use direct paper instead of film, is due to the saving of time, and to the fact that the paper holds surprises in the result, a bit like the polaroid for example. The magic of analog!

The large format camera is a way of working with time and hindsight, even though I work fast, I know what I want when I get on a location, because I would only be taking one shot.

I have been working with these devices for about 20 years. For reflection, the time it takes, the quality and the relationship with people which is quite different. I had no problem with the demonstrations, for example, neither with the police nor with the thugs. Some kind of respect maybe …

Of course the direct paper and the postproduction make it a bit dark, but isn’t the subject himself?