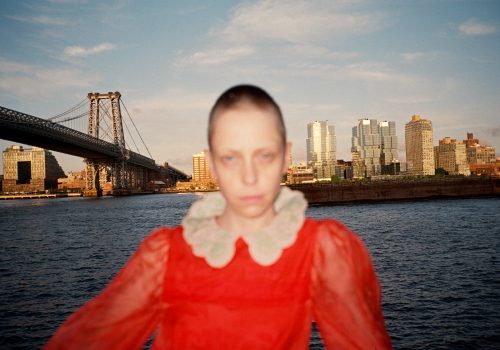 Be here now. Carpe Diem. Live for the Weather. Marie Tomanova’s 2020 Berlin exhibition, Live for the Weather, is inspired by her 2017 photographic series by the same name that brings together her diaristic photography of her life in Mikulov, Czech Republic. Shot almost daily with the only cell phone with a camera in her small town between 2005 and 2010, years before she would go to the United States in 2011 and turn to photography as her primary medium, Tomanova recorded moments and relationships out of this deeply personal and emotional photographic trace. Art historian Ksenia Nouril writes, “Live for the Weather embodies the carefree spirit of youth in the face of an uncertain future. Her lovers, friends, and family members mingle in this asynchronous narrative…of youth.”1 This complex and honest expression of being young, or just being, is also a pivotal aspect of Tomanova’s ongoing Young American portrait series (2015-). It is perhaps even better represented in her 2019-2020 portraits that capture the fleeting, in addition to establishing an empathic—human—connection, as seen in Isabel (East River) (2020), in which life itself is encapsulated between skinned elbows and summer flowers. This later type of imagery forms the vertebrae of the film on display in the gallery, New York New York II (2020), a work about simply being.

Displacement, place, community, self, and memory are the key themes in Tomanova’s photography and film work that coalesce in her Young American portraits and allow her to connect with others, to see herself in the context of a new environment and society, and to see herself in the American landscape. The image, the portrait, the relationship between Tomanova and subject, the relationship between photograph and viewer, and ultimately, the relationship between photograph and society, establishes a bond of humanness and sensitivity in which there exists or has a potential for tolerance, acceptance, identification, and affinity. Young American resonates with directness, presence, and the ability to see deeply an individual with whom we can identify. In Tomanova’s words, “This work is really a portrayal of humanness. I hope people can look at these pictures and see themselves—I see myself in them… And I hope that people see that we are all just that: people, with the same human core.”2

Tomanova’s emphasis on connection is important, particularly if one considers it in light of how photographer Wolfgang Tillmans speaks of the process of portraiture as one of exchange: “Making a portrait is a fundamental artistic act—and the process of it is a very direct human exchange.   The actual dynamics of vulnerability and exposure and embarrassment and honesty do not change, ever it requires of me as a person to be sort of intact and fluid.”3 This process of exchange (and empathy) is essential for understanding Tomanova’s Young American portraits that reveal honesty and openness as a shared space between photographer and subject. Human connection and exchange are crucial features of Tomanova’s work, as she emphasizes in speaking about her process, “When I would go photograph them, I also realized that most of the time I talk with them and shoot less than half of the time. I really love to hear people’s stories and I love to know where they’re from, where they came from, what their dreams are, and what is important to them. That’s a big part of establishing intimacy. A lot of these people really opened up and let me in. There’s a special something in the photos, in their eyes, that is very visible and important.”4 Tomanova’s comments echo those of photographer Rineke Dijkstra, who states, “I like to photograph people: the camera is a way to connect with people and to find out who they are and how I relate to them. In the end, it’s all about recognition and reflection.”5 The idea of an affirmative space, particularly around the concept of connection, belonging, and being (dasein), is paramount in understanding Tomanova’s work.

The three bodies of work—Live for the Weather, Young American, New York New York II—are contrasted and brought into tension with an entirely new project, created during Tomanova’s first trip back home in over eight years to her family farm in South Moravia, It Was Once My Universe (2019), presented here as part of a larger photographic series, but also existing as a film. It was not her choice to stay away from home so long, but she could not return. And for her, it hurt to be away. It is this seeing of life, then and now, from 2005 until 2020—all these seconds in time—that is the essence of this exhibition, bringing these related bodies of work together with photographs created over a decade apart.

After graduating with an MFA in painting, Tomanova moved to the United States in 2011 and began to use photography as a means to work through her feelings of displacement living there. During this time in the United States, when things were difficult, she relived and idealized home in her mind, so when she actually went back to the Czech Republic in the winter of 2018, she was unprepared for the deep confusion and conflict she found in herself. This disorientation, too, is living for the weather, or being in the moment. Home is linked to a deeply rooted sense of being, or existence. During this time, she felt she had become alien, and yet she still belonged. It was home, but so was America. John Berger wrote, “To emigrate is always to dismantle the center of the world, and so to move into a lost, disoriented one of fragments.”6 It Was Once My Universe is about that. It is about contradictory feelings and disorientation. It is about home, family, memory, distance, and time. The date stamp in some of the photos is important because it emphasizes a specific time, a moment, an instant. And yet there is something very off-kilter, just as she was in her return home to Mikulov, because the camera was still set to a New York time zone. Achronological, the images deceive in a subtle yet powerful way, like nostalgia, like memory, like a dream. They show both the specificity of a moment, but also the flexibility of time.

cusp of not only the new year but also where Tomanova confronts and struggles to reconcile her divergent selves, almost vibrate, expanding and contracting, almost animated with a shallow breath and movement. They are almost spectral. They are disarming, yet almost entirely quotidian. They evoke abstractly Hesiod’s Works and Days, or the painting tradition of seasons or times of day. In Willy with Horses there is Pieter Bruegel the Elder’s Hunters in the Snow (1565), those daily rhythms tied to space, place, and landscape, rhythms tied to self and home, tied to the weather, to calm and storm, to exaltation and reflection, to joy and sorrow, to having and longing. Together, Live for the Weather (2017) and It Was Once My Universe (2019)—and Young American and New York New York II—bring face-to-face very separate and yet inexorably linked existences and experiences, multiple bodies of self, not always past and not entirely present, but always in the moment that is the photograph.

Marie Tomanova : Live for the Weather