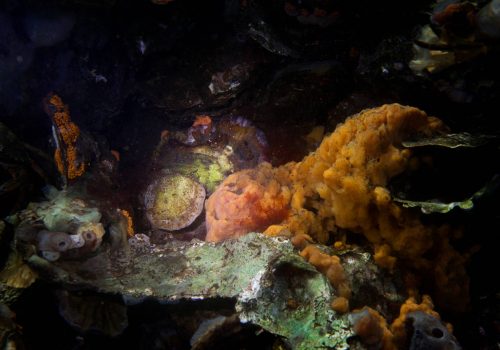 For her series When Red Disappears Elspeth Diederix, one of the Netherlands’ most original artistic photographers of nature, ventured into the secret gardens of Zeeland’s waters. The benthic flora and fauna of this chilly, turbid, green-grey water turned out to display an extraordinary visual richness that was a perfect complement to the large body of botanical work that Diederix has made in gardens and parks. Enthused and inspired, she took on the ordeal of diving there in order to make underwater photographs of the astonishing colour formations revealed by her lights. Through Diederix’ goggles we glimpse an unspoiled underwater paradise, where life – in the form of shells, sponges, seaweeds, anemones and other organisms – shows its most colourful side.

A blaze of colour on the Dutch sea bed

The title of the exhibition, When Red Disappears, refers to the phenomenon that the deeper one dives the more the colour red vanishes from the visible spectrum, the result of various physical and optical factors. Only when the sea bed is illuminated directly are the extraordinary colours of its inhabitants revealed in all their glory. Diederix has taken underwater photographs before, in tropical and subtropical seas, images of assemblies drifting in the monochrome blue of the sea. This, however, was the first time she had ventured into Dutch waters. This new working domain immediately prompted new working methods: rather than staging scenes, Diederix now concentrated on depicting nature itself. In this sense When Red Disappears forms a counterpart to the blog she started in 2009, The Studio Garden, in which her interventions have gradually moved to the background and the pure beauty of nature allowed to come to the fore.

Diederix’ underwater photographs call up associations with visual equivalents in art history. She makes no secret of the fact that she has been inspired by 17th-century still-life paintings of the Low Countries, and in fact this genre formed one of the central impulses of her underwater photography: she purposefully searches for tableaus that closely approach the genre in terms of composition, colour and lighting, and succeeds remarkably well. Although it is a correspondence that she has not consciously sought, Diederix’ photos also show some similarities to abstract-expressionist paintings of the 1940s and 1950s.

Combinations with objects from the Rijksmuseum

When Red Disappears includes a number of valuable works on loan from the Rijksmuseum which form a perfect match with Diederix’ photo series. The stately red period room is showing Still Life with Nautilus Beaker (1648–1688) by the 17th-century painter Frans Sant-Acker, a key work with which Diederix’ still lifes show a strong affinity with regard to composition, lighting, colour and the detailed rendition of texture. Here, two worlds widely separated by time, space and location come together. The gallery showing Diederix’ shell photographs also displays an actual shell with traces of red paint; it was found amongst the remains of Willem Barentsz’ 1596 winter shelter, Het Behouden Huys, on Nova Zembla. The red pigment on this object is also a nod to the title of the exhibition. On the Bel-etage, the book La photographie sous-marine et les progrès de la photographie (1900) by the biologist Louis Boutan (1859–1934) – the world’s first underwater photographer – opens to a page showing a photograph of a diver under water in full diving gear. These historic objects help to bring concepts such as aesthetics, craftsmanship, and historical awareness into sharp relief.

In recent years Diederix has been increasingly inspired by nature itself, without recourse to any staging. Her underwater series shows a thematic kinship with the beautiful and extremely rare photobook Photographs of British Algae. Cyanotype Impressions (ca. 1843–1853), loaned especially for this exhibition by the Rijksmuseum. The English botanist and photographer Anna Atkins (1799–1871) devoted herself to the scientific study of seaweeds, which she documented systematically using cyanotypes (blueprints). In the gallery containing Diederix’ photographs of seaweed, Atkins’ book engages in a trans-historic dialogue between these two female photographic pioneers.

On the occasion of this exhibition Fw:Books is publishing the photobook When Red Disappears. Besides a rich selection of images from the series, printed in ‘extended colours’ and set against a black background, it contains an essay by the noted science writer Philip Ball. Designed by Hans Gremmen, printed by robstolk, 88 pages, and priced €35, it is available in the Huis Marseille museum shop.

Elspeth Diederix (Nairobi, 1971) completed her studies at the Gerrit Rietveld Academy in 1995 (specializing in Free Work) and from 1998 to 2000 she was a resident artist at Amsterdam’s Academy for the Visual Arts. Before she started photographing she made sculptures and paintings, and both influences can still be traced in her photographic work. In 2002 Diederix won the Prix de Rome for Photography, and since then she has enjoyed international renown as a photographic artist. Huis Marseille has shown her work before, in the group exhibitions Supernatural (2004) and The Rediscovery of the World (2013). In 2009 Diederix started a blog, The Studio Garden, and since 2018 she has maintained a large public flower garden in Amsterdam’s Erasmus Park under the name The Miracle Garden – a garden which also serves as her atelier.