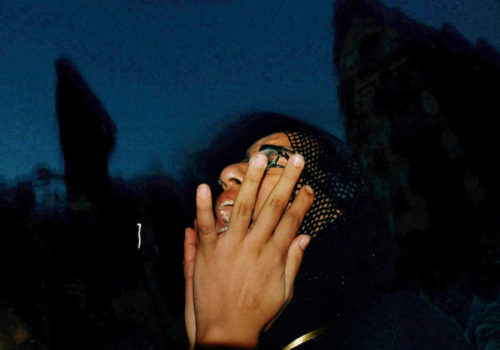 We enter Laura El-Tantawy’s book through the tiny door, after swallowing the bitter potion of History. As in a dream, the almost illegible images of the first pages gradually become clear as we pass from a small format to double-page spreads which draw the reader into the whirlwind that has devastated Egypt over the past ten years. We follow the emotional chaos that El-Tantawy experienced upon her return from the United States, in 2005, against a background of political decadence.

“When I started, my approach was mainly personal and reflective. I would go in the streets in order to get used to the country again,” she explained to me a few months ago in an interview for FLTR. “When I came back in 2005, there was already a lot of contestation in Egypt. We knew that something was going to happen but we didn’t know when. I found myself involved in the political movement naturally. The work developed like that, and the revolution happened. There was no question: I had to be there. It was historical for me as an Egyptian…My idea about Egypt has changed after last August though and it has become very difficult for me. I saw violence there in a way that I had never seen before and that shut me down. For a long time, what I was shooting in Egypt was based on memories from my childhood. Seeing so much aggression made the compassion and empathy completely disappear and I understood that the project was done.”

In the Shadow of the Pyramids follows this narrative, combining El-Tantawy’s photographs taken between 2005 and 2014, and those of her childhood—printed in a small format reminiscent of locket photographs—along with personal texts.
« Standing in the Shadow of the Pyramids.
The beginning meets the end.
Here I choose to bury my most valued possession.
In a place I once called home. »
The book concludes with these words, followed by a photograph of a little girl floating on a swing set above a lawn covered with flowers. Her eyes are closed, her hair blows in the wind, and on her dress, the same heart that shone everywhere in the streets of Cairo before the Revolution of January 25th, 2011. The little girl is Laura El-Tantawy. She is also Egypt, which is now filled with hope after a period as dark as a long, moonless night.

Despite the darkness, El-Tantawy takes advantage of the emotional range that color offers. Red dominates the images— red like the streets filled with fire and flowing with blood, like the passion consuming the nation. “I lived a long time in solitude and realized that when you share the sadness or the trauma it becomes a shared expérience”, she says. Informal, poetic, intrinsically personal, her style succeeds through transcendence in serving a documentary purpose. Published on the anniversary of the Revolution, her diary is that of all who fought it – those who, lost in the middle of the book as they were in the middle of the agitated crowd, El-Tantawy captures, from close-up, their fists against their lips, their round tears, their dark eyes and trembling hopes.

BOOK
Laura El-Tantawy, In the Shadow of the Pyramids
*shortlisted for 2014 Unseen Dummy Award*
Edition of 500
All books signed and numbered
440 pages with Japanese folds including 7 smaller text pages & 18 pages as single sheets
Designer: SYB