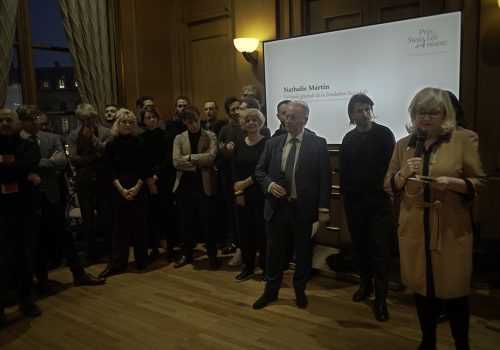 The Swiss Life Foundation announces the winners of the new edition of the 4 Hands Swiss Life Award. The Jury * chose this January 28 the photography and music duo composed of Edouard Taufenbach and Régis Campo for their project Le Bleu du Ciel. Nathalie Martin, general delegate of the Swiss Life Foundation, praised the artistic quality of the 9 finalists for this 4th edition and thanked the jury and the artistic advisers for their commitment.

The winners will receive a grant of € 15,000 each to make the project presented to this jury a reality. It will also be accompanied by a bespoke photography and music book by Filigranes editions. Their work will benefit from wide visibility over two years, through exhibitions in Paris and in the region.

This project around the flight of the swallow is the story of a journey. It starts with a childhood memory, the music of these birds in the sky and their gathering on the electric wires before their big departure for Africa, announcing the end of the summer. Twice a year, swallows cross the Sahara and the Mediterranean to reach sub-Saharan Africa and Europe.

From the subject of the swallow, Edouard Taufenbach and Régis Campo will seek to develop a sensitive representation of the passage of time, movement, and exchanges and circulations within a space. On a flight scale, the movement of swallows in the sky is the subject of a fascination that fuels the imagination. The birds seem to follow a score made of ruptures, accelerations and silences, drawing abstract shapes as signs to interpret. This project is an experiment at the intersection of artistic and scientific uses of photographic and musical mediums. Between formal rigor and subjective narration, the research deploys an approach where the swallow in flight representing a force vector, gives form and material to an insatiable desire for freedom with the sky for perspective.

Without ever illustrating each other, the image and the music will chase each other, will exceed each other successively. An aerobatic exercise where the repetition of rhythms and patterns based on the composition of iterative music will dialogue with the repetition of organized images. From one box to another, from one measure to another, from one swallow to another, our work will try to draw spaces of freedom, building a feeling of movement, speed, breaks in lines , characteristic of the flight of the swallows.

Edouard Taufenbach and Régis Campo, formation of an intergenerational duo

Edouard Taufenbach discovered the work of the composer Régis Campo through his album Ombra Felice released in 2011. He has since been following his work closely until his election in 2017 to the Academy of Fine Arts in the Musical composition section. In spring 2019, when the new edition of the Swiss Life Prize for 4 hands was announced, he saw the chance to contact him to work together. The meeting was strong because they share a common cinephile and musical imagination.

Edouard Taufenbach was born in 1988. A graduate with a master’s degree in digital arts and media from Paris 1 – Panthéon Sorbonne, he already has numerous solo exhibitions to his credit. He received the Prix Coup de Coeur from the Festival Ici & Demain in 2014 and was accepted in residence at the Villa Medici in 2019. He is represented by Galerie Binôme in Paris, Elizabeth Houston Gallery in New York, Spazio Nuovo in Rome, and the Almanaque Fotográfica in Mexico City.

Edouard pursues formal work from photographs. He reworks existing photographs like an editor. Through accumulation, framing, juxtaposition and repetition, he seeks to deploy the formal and fictional potential of images. The obsession remains linked to the activation of memory, reminiscence and the feeling of movement.

Born in 1968, Régis Campo studied composition with Georges Bœuf at the Conservatoire de Marseille. He continued in the composition and musical civilization class of Jacques Charpentier at the National Conservatory of the Paris region. He then entered the National Conservatory of Music and Dance in Paris in the classes of Alain Bancquart and Gérard Grisey where he obtained his first prize for composition in 1995. In 1992, he met the Russian composer Edison Denisov who considered him then as “one of the most gifted of his generation

“. From 1999 to 2001, he was a resident at the Villa Medici. Since 2003, his composition class at the Marseille Conservatory has been a place of sharing and openness to various musical aesthetics. His style, often described as playful and colorful, emphasizes melodic invention, humor, joy and a great vitality of tempos. He was elected to the Academy of Fine Arts on May 17, 2017, in the Musical composition section, in the chair previously occupied by Charles Chaynes.

The main steps to come:

– From February 2020: creative work by artists, support for the editor and artistic advisers

– July 1, 2020: presentation of the first works to the press during the Rencontres de la photographie in Arles.

– From November 13 to 15, 2020: revelation of the work at the Salon Approche, release of the photography and music edition and signature of the work during Paris Photo

– From 9 to 23 December 2020: exhibition at the Galerie Thierry Bigaignon

– From September 9 to 30, 2021: freeze-frame exhibition gallery in Bordeaux

About the Swiss Life Foundation

Since 2008, Swiss Life France has opened a corporate foundation in order to develop its patronage actions. It is engaged in time and everywhere in France, in united and innovative projects, so that longevity is synonymous with opportunities, well-being and freedom. Its main missions is thus to act for sustainable health (E.g cancer research with “A daffodil for Curie” and support for France Alzheimer), to support creation (E.g: support for young artists, in particular the 4 Hands Swiss Life Award) and to encourage solidarity (E.g “Help to help” program to support projects carried out by its employees).

By supporting projects of general interest, the Swiss Life Foundation places itself above all at the service of civil society to enhance everyone’s choices and promote better living together. It thus engages with associative partners carrying out projects in which it believes and which it co-builds alongside them over the long term. Its action allows employees to get involved and develop beyond their profession, while creating links with their colleagues. It also benefits the Swiss Life brand, of which it embodies human and societal commitments, in line with Corporate Social Responsibility.

Through its patronage actions, the Swiss Life Foundation works for a society where everyone can achieve their goals, thanks to their personal choices and collective mutual aid. Guided by values ​​of accomplishment, trust, proximity and solidarity, the Foundation asserts itself as the benchmark that catalyzes, throughout France, the solidarity commitments of Swiss Life and its employees. It is committed on a daily basis to keep an ambitious promise: “support your choices, support your dreams”.

Swiss Life is a leading player in insurance and wealth management, with a recognized positioning as a private management insurer. Our approach is global in private banking, financial management, as well as in health, providence and damage. A global approach, because the essence of our job is to support each life course, private and professional, and to build every day a lasting relationship with each of our customers, individuals and businesses. Our personalized advice, based on proximity and mutual trust, enlightens our customers so that they can make their own choices and be fully involved in their lives, at each of its stages. By acting in this responsible manner, Swiss Life ensures a societal role, a source of pride for its employees and its sales forces.