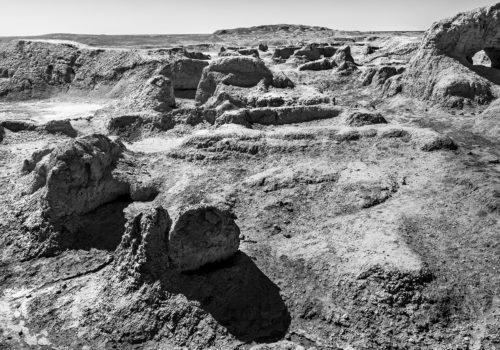 Photographer Jean-Christophe Ballot brings his gaze on The Epic of Gilgamesh, the first story of humanity, and brings to life 100 Mesopotamian works in an art book published by Éditions Diane de Selliers.

In order to take the full measure of this ancient civilization, accompanied by Diane de Selliers, Jean-Christophe Ballot went to Iraq to photograph the archaeological sites of southern Mesopotamia: Babylon, Borsipa, Nippur, Our, Ourouk and the Marshes region, thus providing an exceptional setting for the story and the works that illustrate it.

Gabriel Bauret, curator of photographic exhibitions, presents the work of Jean-Christophe Ballot in his introduction “from light to story” and underlines the resonance of words and the scope of images.

The oldest tale of mankind

More than 4,000 years ago, a story – the oldest that has come down to us – was told in Mesopotamia: that of the hero Gilgamesh, king of the Uruk dynasty. Engraved on clay tablets between the end of the 3rd and the beginning of the 2nd millennium BC, this legend was then transmitted throughout the Eastern world for more than 2000 years before sinking into oblivion.

Rediscovered in the middle of the 19th century, this epic, which recounts, among other things, the story of the Flood as we find it in the Bible, invites us to read it as universal as it is contemporary.

Like all ancient heroes, Gilgamesh connects past and present. He knows pride and glory, friendship and sadness, trust and doubt. He is brave and fearless in the face of danger, anxious and weak when faced with the ultimate test of life. After the death of his friend Enkidou, his destiny changes and his dreams of immortality bring him back to his status as a mortal man, a path of life that knows neither time nor frontier.

Photographer and sculptor of light, Jean-Christophe Ballot has been creating contemplative and dreamlike works for thirty years. He created a large-scale photographic work around the story of Gilgamesh, in black and white, and gives new life to more than a hundred thousand-year-old works.

A large part of the selected works being kept at the Louvre, Jean-Christophe Ballot left his lenses, lights and decorative accessories there for three months. At the rate of one day a week, Tuesday, the closing day, Jean-Christophe Ballot looked at these objects and gave them a new lease on life. Sometimes directly installed in the rooms of the museum, where the open showcases offered him the possibility of capturing the intimacy of the works, sometimes investing a reserve room transformed for the occasion into a photo studio, the photographer, through his work of luminous creation, awakened terracotta figurines. Humbaba’s bellow is heard, Gilgamesh’s despair is palpable, the courtesan’s wisdom is soothing. The magic also worked for one night at the British Museum in London, for a day at the Vorderasiatisches Museum in Berlin and for two days at the National Museum of Iraq in Baghdad.

The Collection opens for the first time to photography. Playing with light, focusing on a detail, creating a new spatio-temporal environment, the works of Jean-Christophe Ballot weave the link between past and present. Black and white intensify this timelessness. Thanks to its light effects, it sublimates the works, writes a new story for them and makes them dialogue wonderfully with the text.

Two encounters thus take shape before the eyes of the reader: that between text and image (well known to Éditions Diane de Selliers) and that between a thousand-year-old work and a contemporary work.

Photographs by Jean-Christophe Ballot Translation from Arabic by Abed Azrié

Scientific direction of the iconography of Ariane Thomas

Limited edition: 115 numbered copies accompanied by an original silver photograph printed on baryta paper, numbered and signed by the artist, inserted in a pocket with conservation flaps slipped inside the volume. Available from the publisher. Price: 880 €