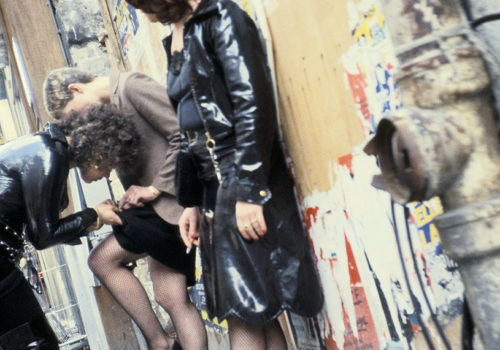 His name is Jean Charles Blanc. His book is titled: Fermé le dimanche (Closed on Sunday). It is published by éditions à la sauvette. He accompanied his images with this text:

Pedestrian of Paris, how many times I had the project of making little Parisian “sketches”. But my photographic attempts always left me unsatisfied. I had the idea of ​​photographing a street. Not Ed Ruscha style, but a street full of stories, adventures, daydreams. Paris being a meeting of villages, each village has its Grande Rue. Which one ?

I can say today that the discovery of Storyville Portraits on the prostitutes of New Orleans made by E.J. Bellocq in 1912, encouraged me to return to stroll in the Halles district some ten years after its destruction.

One of the oldest streets in Paris in a mythical district, celebrated by cinema, literature, photography and the popular press was undergoing its metamorphosis. Once the hole in Les Halles had been filled in, the Beaubourg plateau had become a museum, the rue Saint Denis of my high school years had a facelift.

The Halles no longer being, the nights have lost their festivity. For the eye of the photographer, the daytime atmosphere of the street was just as feverish. The coexistence of the most diverse businesses created a unique atmosphere. I wanted to give back this Parisian air. With its sounds and smells.

Only a discreet and automatic camera allowed me to take pictures on the sly, on the fly, without being seen by the “beauties of the day” who do not like to have their picture taken at their workplace.

On several occasions in the early 1980s, with the camera in the palm of my hand, el rectangulo en la mano as Sergio Larrain says, I “crunched” at will like the draftsman drawing his  lines while observing the model without looking at the paper.

Once revealed, the images created surprises. Once the sorting was completed, I continued to develop a continuity of views to recreate the walk of the pedestrian and the hustle and bustle of the street.

With Closed on Sunday, it is a bit of the memory of a Paris preserved here.

From a Paris, where as Eric Hazan writes, there are no lost steps.