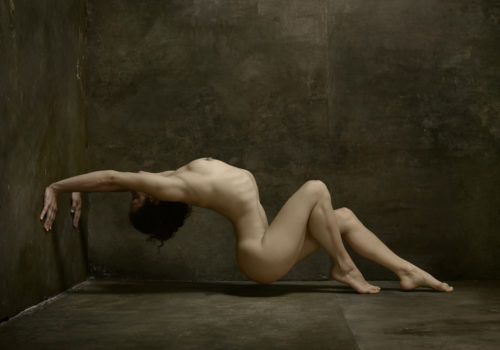 1: a state of mental and emotional balance

b: a state of adjustment between divergent or opposing influences or elements

2: a state of equilibrium between opposing forces or actions that may be static or dynamic

The genesis of Equilibrium seems almost accidental, without prior conceptualization, which is an exception in Olivier Valsecchi’s portfolio. It imposed itself on him naturally following personal events which led him to abandon his camera for a time. This period of his life, which he qualifies as a period of astonishment, was nevertheless the unconscious motor of a new impulse, a new state of movement, a new equilibrium.

Instinctively following his habits, Valsecchi began to direct bodies in the image of his unconscious, in front of a background painted by him in the image of Rembrandt’s pictorial backgrounds. The choice for this green called “Veronese Green” is intrinsically linked to the origins of classical painting for the artist. He thus establishes a parallel with the theme he is pursuing: a stable renewal. Equilibrium thus emphasizes the necessary work on oneself in order not only to stay afloat, but also to move forward.

While some characters here seem to be under intense pressure, these portraits also question the importance of each person’s approach to their interpretation; does the model try to push back a crushing wall, or, on the contrary, does he/she take support there to find their balance? The title itself: Equilibrium, underlies the existence of two opposing states. They are represented here as heaviness and lightness, and delicately illustrated by the positions adopted by the subjects; where some seem to be reaching a breaking point, others are about to levitate.

Olivier Valsecchi sees photography as a medium capable of conveying the emotions of his psyche. Directing his models with millimeter precision, he orchestrates phantasmagorical scenes at the heart of which the bodies, bathed in a theatrical chiaroscuro, emancipate themselves from their identity to become the elements of a narrative framework.

Revealed to the general public in 2010 with his series Dust which was awarded the prestigious Hasselblad Masters Awards two years later, he has since created no less than five series according to a logical narrative framework. Indeed, following this first success staging the birth of life according to a cosmogonic principle, he was then asked to design a new series on the theme “Evoke” by Hasselblad; Klecksography was born, a series inspired by the work of Professor Rorscharch for which Valsechi organizes naked bodies according to a symmetry guided by his unconscious. In 2013, he reinvests Dust to bring his characters to life, transposing them into Homeric heroes, half gods, half men. With Drifting, he mediates between the pictorial treatment, all in chiaroscuro of Dust, associated with the architecture of the body taken to the extreme in Klecksography. It thus gives flesh to the Vanities of the Flemish 17th century. Finally, with Amazon’s portraits, Valsecchi approaches a radically different angle by highlighting the animal side of his subjects in order to offer a more contemplative series.