Duane Michals : From The Studio 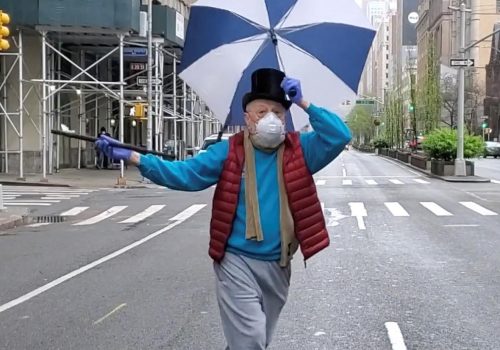 Duane Michals never became bored during confinement. Between reading, writing, he composed the series Gipsy Rose Me, thought as a continuation of Bozo Boy on Parade, part of his film series The Corona Follies (2020).

“At the beginning of the shutdown, there was an article about my 1964 series Empty New York, when once I had loved the novelty of the early morning in New York, empty of activity. And now, 56 years later, I am amazed at how fast the city shut down. It has certainly been a time for introspection.
I’ve been working on short films, about one minute each, that are about the virus, compiled into one sequence The Corona Follies. The idea for these films began when I recently went to the bank and found a long stick on the sidewalk, so I strutted down the street waving it like a baton, all the way to the window of the bank. This led to my creation of the character of Bozo Boy, as Bozo Boy on Parade.
I enjoy seeing what my ideas look like in real life, by generating my own energy through the character and working quickly, adapting as I go.

I’ve always functioned on the principle of less purpose, more fun, and when times are stressful, it’s important to find and have fun. And I love it when something unexpected comes up. The best part is the discovery, and responding to and recognizing it. That’s what these films have been for me.
I think the more serious you are, the more foolish you have to be, and you have to find ways to giggle. When I am not filming, my studio is my nest. I’m never bored, as I’m surrounded by tons of books I want to read, movies I want to watch, and things I want to write. This is the atmosphere in which I’ve created 11 sculptures, also new for me, and it’s been part of my meditation process.
While working on the sculptures, I’ve been thinking more about the work of Sonia Delaunay, who I find very interesting, and I think she gets overlooked a lot.
While I was doing everything myself for years, more recently I have had a group of people to work with. I call us the 19th street players. They appear in the movies, help make things, and it’s quite nice. Even remotely, I like the idea of having a community of people to interact with.”
More on Duane Michals
– Duane Michals is represented by the DC Moore Gallery, New York.
– Duane Michals, The Corona Folies, 2020, in conjunction with High Street Pictures.