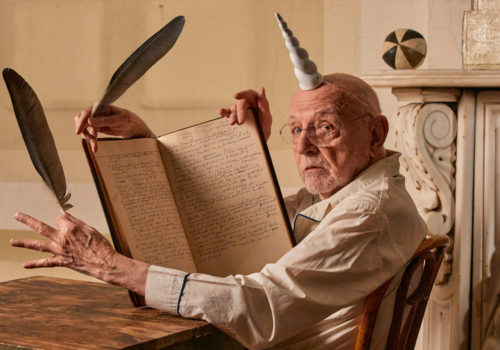 Duane Michals just turned 90. Admira his gallery in Milan and us wanted to wish him a very happy birthday by showing you these few images and this text by Enrica Viganò.

“When you look at my photographs, you are looking at my thoughts.” These words are the key to interpreting the entire oeuvre of Duane Michals. An oeuvre that matches his living philosophy – a rare thing among artists. Fifty years ago, when he was starting out, this sentence was already the basis of images that aimed to shake up the axioms of photographic language in order to revolutionize form and content.

His personality – an acute sensibility, far removed from the common place – compelled him since the very beginning to look through the surface of things, beyond photographable reality, in order to capture the essence of our existence: “I believe in the imagination. What I cannot see is infinitely more important than what I can see”. It was on the content that he carried out his first revolution: Michals distanced himself from photography as a visual-memory tool or as a narrative of facts. What cannot be seen, what remains closed up, became the subject of his investigations.

Given the complexity and delicacy of his work’s content, it was inevitable that Michals should invent new forms of expression. Cue his second revolution: sequences and photo-texts. With the former, Michals questions the sacred status of the single image by constructing photo-stories with several pictures, thus challenging the self-containment and self-sufficiency of the solitary still image. Moreover, with the works in which he incorporates texts of varying length, in meticulously handwritten script, he rejects the conviction that a photo says more than a thousand words – an idea cherished by traditional photographers of his era.

Michals came into conflict with the common places around him, but continued, unperturbed, to pursue his creativity, which far exceeds the habits of the art world. This is echoed by the diatribe-like quality of one of his thematic exhibitions (On Contemporary Art, 2001): a series that revisits the works of highly-rated artists by parodying their images and by satirical texts in which the “official” voice of art critics lauds their creativity in codified language. Through this series – a clear statement on contemporary art, or, rather, on its market’s vice and treachery – Michals emphasizes this message: “Never try to be an artist. Just do your work. If the work is true, it will become art.”

He has never lacked courage, as evidenced by the themes addressed throughout his career. With a language that cuts to the quick, he tackles mystical themes and also other, more existential ones, such as the exploration of life and death, which is always imagined as a transformation, and of time too: “As soon as I say ‛now’, it becomes ‛then’”. Other topics often considered relate to the human condition in society: racism, female emancipation, homosexuality and war, among others.

In parallel to his personal investigations, Michals has continued his commercial work for magazines such as Vogue, Esquire and Scientific American. His speciality is the portrait, which here too is distinguished by relentlessly innovative creativity. He has photographed many figures in the worlds of culture and show business.

Michals is an artist who continually pushes back his own limits in the search for new kinds of expression. He is bursting with energy and, well into his nineties, he is continuing to spit out uncommon ideas, Even now, his creative production is unstoppable and he is experimenting with different art expressions and tools: video, sculpture, design, writing, painting and collage, always succeeding in surprising us with his infinite imagination.

The secret of this fascinating man perhaps lies in the fact that he carries himself with the joy and lightness of a young boy, but looks at the world with the full awareness of an old wise man.