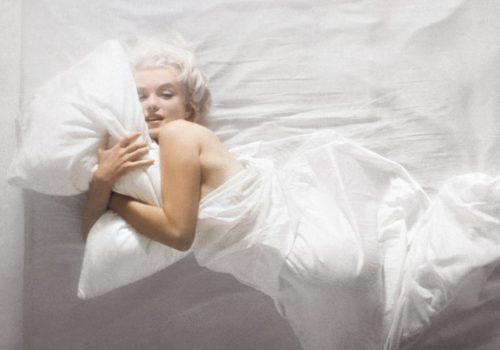 Marilyn Monroe is a star cast to earth, a spirit in the flesh, and on camera, that’s ethereal. Eternal. Forever a star glowing bright in the sky and we watch as it burns, burns everything in its wake until one day, it’ vanishes. Explosions of sorts, and things leading in that direction, and stories and legends and myths. And Marilyn was the greatest star of them all.

In 1961, she posed at a shoot for Douglas Kirkland, who shot her for Look, is now published as With Marilyn, An Evening/1961 (Glitterati Incorporated), with a luscious jacket flowing like a sheet over hot pink linen boards. There’s always this energy, a spirit flowing through the ether, captured forever in these images, a force that floats through our fingers as we page through the book, which is page after page of Marilyn wearing nothing but Chanel No. 5 in bed. It is quite literally exquisite.

The cumulative affect of these photographs is the heightened sense of a presence that is not physical. It is ethereal, the light of life that shines through the flesh and the eyes until it transfixes you with its innocent stare, its curious glance, it’s knowing glow. Monroe is the consume professional, always understanding that the image creates an affect, and that she is the master of the medium, her effortless presence that allows her to look like an angel in heaven in so many of Kirkland’s portraits.

Kirkland’s personal account runs throughout, an insightful and concisely told tale of connecting with the woman that is Marilyn Monroe. He recounts, “Frank Sinatra filled the room with his seductive beautiful ballads. That was the atmosphere of the evening: quiet, soft, and enticing. I was becoming very stimulated and I made no secret of it. Marilyn showed me how she felt; slithering erotically between the sheets. I kept shooting. Then at a certain point she stopped and looked up and pleaded, ‘Why don’t you come down here with me?’”

The shoot ended past midnight and the next day Kirkland developed the film. As he recalls, “It was about 6:30 that afternoon when I swung my rented baby-blue Thunderbird convertible out of the Chateau Marmont and onto Sunset Strip to head to Marilyn’s place with the pictures. It felt almost like I was going on a date, as Elvis reminded me loudly over the radio, that ‘You Aon’t Nothin’ But a Hound Dog.’”

“I arrived at Marilyn’s secret apartment with a beat in my step and the pictures and a small light box in hand and rang the doorbell…. When the door opened, I was greeted by a completely different person than the one I expected to see. It was Marilyn, although you could hardly tell. She was wearing dark glasses and had a scarf over her head and when she spoke, the music had gone from her voice.”

Monroe requested a magnifying glass, send Kirkland to the store, and then proceeded to show him her “kills.” As she went through the images, she cut Kirkland’s film right before his very eyes. Kirkland observes how her mood, once finished with the negative aspects of their collaboration, improved reasonably, and she became involved in selecting the image that defined this shoot, the shot where she clutches the pillow, floating like an angel across the page. Marilyn knew the business of her image and it served her well.

Just as it serves us, some fifty years after she has died. Her untimely yet not inconsequential death forever ingrains the pleasure of looking at her image as it arcs and crests and with the foresight of what is to come how we can see the shadows of death creeping into these images. We see Marilyn’s transformation of spirit and flesh, made one and undone by the camera lens. And Kirkland’s images, none are ever so pure and innocent for so rarely has anyone said No to Miss Marilyn Monroe.

A selection of photographs of Marilyn Monroe will be exhibited at
Galerie Basia Embiricos
September 13, 2012 to October 13, 2012
14 Rue Des Jardins Saint-Paul
75004 Paris – France

Book: When We Were Young by Douglas Kirkland