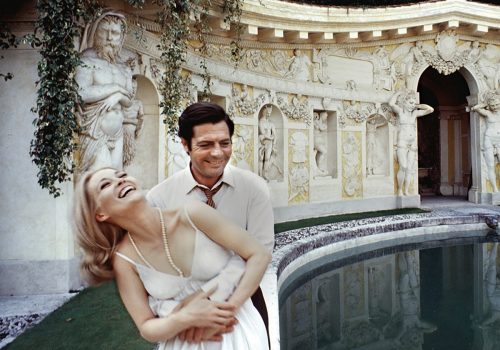 “I am the luckiest person in the world! This is my secret. I do the thing I like the most: photography!” This is how Douglas Kirkland describes his job, famous especially for his photographs of celebrities, in his over 50 years long career, he has taken legendary portraits, some of them became a symbol of their time.

I have fond memories of his way of taking us with him on more than 170 movie sets, photographing hundreds of actors and actresses, the most iconic faces of the cinema world. He captured them during sequences of films that are forever stuck in our memory, during Hollywood’s golden years,

Douglas chose to celebrate the subjects of his photographs. With his highly professional approach and his experience, he disguised and lessened the excesses of the protagonists of his photographs and, supported by his amazing creativity, he always succeeded in capturing them exactly as they liked to appear.

His relationship with the people he photographs is friendly, informal and full of niceness; his eye-contact with the person that is in front of his camera allows everyone to relax and rely on his brilliant vision.

This particular exchange with the protagonists of his photographs is also an act of love. Douglas Kirkland’s talent is supported by a wonderful gift: a constant reliability that characterized every moment of his life. When he was with film stars, with agents, photo-editors and editors in chief of magazines and newspapers and with his friends too. He has always been so trustworthy.

I like to remember the meetings in LA and NY with Francoise and Douglas Kirkland, with whom I share a marvelous friendship. We always had a great time together, days full of laughter. Now every morning, in my studio, I am happy to see the photographs of their dinners, their trips and Douglas’ assignments that Francoise posts on the social networks, these images keeps me company.

You can’t talk about Douglas Kirkland without talking about his wife Francoise. Douglas is still handsome and when he was young he was very charming, Francoise too is an extremely fascinating woman, her green eyes are hypnotic. Together they make such a wonderful couple, very close both in their private and professional life. They are connected by an overwhelming harmony: Douglas’ creativity and Francoise’s fantastic energy, working behind the scenes she has been always able to perfectly coordinate his numerous projects – I still remember the faxes that Francoise used to send me from Los Angeles that I would find in the morning in my office in Milan.

Douglas’ talent is in front of everyone’s eyes, even people that aren’t in the photography world ask me about him.

Beside his tireless work in the cinema environment, I have also vivid memories of his numerous reportages, including an unforgettable one about an astronomic observatory published on Geo US.

Speaking about his job, Douglas often admits that every time he begins working on a new project is like starting from scratch again, because there are no absolutes in a photographer’s career.

Grazia Neri was born in Milan. After working at Newsblitz photoagency, she got involved in her own photography business in 1966 by representing the new born French agency Gamma that split up a few years later and gave birth to Sygma, which she then opted to represent instead. Since then, Grazia Neri has enjoyed the trust of some of the most renowned photographers, prestigious magazines and very committed agencies such as Contact, Matrix, Network, Vu…She quite legitimely is considered as a serious reference both for photographers and for agencies around the world. She is the artistic director of her own gallery which she opened in 1997 in her home town and the president of the agency which bears her name.