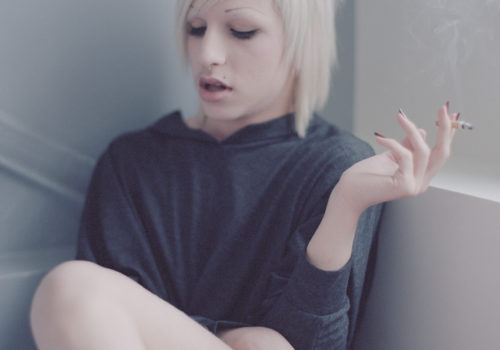 The gallery Les Filles du Calvaire present the first solo exhibition by Dorothée Smith in Paris. This young French artist graduated from the National Photography School in Arles in 2010. For the past year and a half she has been a resident at Fresnoy, the National Studio of Contemporary Arts in Tourcoing. Dorothée Smith explores the matter of gender and transgender. She does this through her various photography series and her video installation, C19H28O2 (Agnès), which are to be shown at the gallery.

“Dorothée Smith is unreserved, her Luminist yet dark approach to the visible portrays the uncertainty of sexual roles. The matter of gender, questioned in philosophy for more than 20 years, is very significant in the intellectual development of her work. Some say that her pictures show characteristics of Renaissance painting while others see a Romantic influence in her works.

Is this because some of her works show a gravity peculiar to Florentine portrait painting or is it because of the sometimes crepuscular nature of her background landscapes. Maybe it is because of the sensitive intensity of German painters such as Caspar David Friedric: could some of the landscape fragments from her Loyly series be seen as miniature replicas of his snow-capped peaks?

Her work is embedded deep within its time. At times, her world is torn by violence. Very soft faces, lost eyes, bodies shown in the warm intimacy of mirages, mild ice floes sublimated into breaths and lifeless horizons… all are polarized, like magnetic dawns, by the way in which gender division is challenged in this modern world. Here, it is more about metamorphoses than about metaphors. This re-evaluation, which is often noticeable in facial appearances, seems to find climatic expression among nature scenes where water, ice and steam play upon their mutability. It is literally as if freezing and melting points had become conceptual actors in the now unsteady masculine-feminine dichotomy.

These pictures allow inconsistent states of substance to blend with utopian melancholy. She has flawless expectations when she gives a poetic and formal shape to the intense and arduous alteration process.[…]”

Hear us marching up slowly
Dorothée Smith
Until february 25, 2012