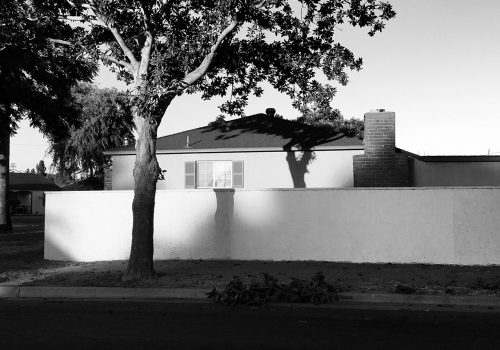 At the end of 2015, photographer Diana Matar began searching in the United States for the places where the police had killed civilians. She made detailed maps in her studio and compiled information on each fatal case of police violence in the past two years. Diana Matar then spent two years traveling the roads and photographing most of the 2,200 sites where these murders took place. “I work on a certain history of photography that comes back to the places where things happened, – a genre that generally focuses on war facts or injustices – I use it, however, to record the constant phenomenon of police violence that contaminates America. ”

Working in this genre of landscape and documentary photography, My America is a peaceful but icy criticism of contemporary America. By photographing more than 300 places where police officers have killed American citizens, Diana Matar has established timely photographic language as well as criticism of police brutality, her photographs constantly emphasize the decline of the social structure of the country.

Although her photographs are of a rather classic style, she only uses an iPhone. As she explains: “We wouldn’t know anything about police murders without smartphones. People have started using them to document injustices and share them on the web. I thought it was important to use the same technology when making these still images. ”

This is not the first time that Matar has produced a major series on places of violence. In her previous work, Evidence 2014, which was presented at Tate Modern, the Museum of Contemporary Photography in Chicago at the Institut du Monde Arabe, and in six other international institutions, Diana Matar spent a few years focusing on landscapes and the extra-judicial confinement buildings, kidnappings and murders carried out by the Gaddafi regime in Libya. In response to the disappearance of her stepfather in these circumstances, Matar documented the spaces where these violations were perpetrated against an entire nation.

Diana Matar’s work in America is deeply imbued with this research which highlights the structural issues influencing the large number of murders by the police. It focuses on the history of racial injustice, lack of education and preparation, and one of the lowest levels of police per capita in the world. But Diana Matar intends to deliver much more than statistics: “For me, each image of My America represents not only an act of violence but also the loss of an individual – an individual with family. This is why I am not afraid to use a certain beauty in these descriptions, a concept which tends to the controversy in the representation of violence. ”

For the Museum of Photography in Charleroi, Diana Matar made a selection of 99 photographs from a set of 300 images. The scale of the project reflects the scale of the problem, but requires that we remember each person who was killed. The title of each photograph shows only the name, the dates of birth and death, and the city where the person was killed. The places Matar photographs correspond to the addresses she obtained from police reports. However, she clarified that her images are not crime scenes.

The level of mortality from police violence in America is unique among developed countries. Matar wonders about the reasons that led America to this point, each photograph, representing a death, at a determined time.

A graduate of the Royal College of Art, Diana Matar received the Deutsche Bank Pyramid Award for Fine Arts, the International Fund for Documentary Photography; an arts grant from the Arts Council of England twice; and was nominated for the Pictet Prizes in 2010, 2015 and 2016. Her works are part of public and private collections and have been exhibited in numerous institutions, notably the Tate Modern in London; the National Museum of Singapore; the Folkswang Museum, Essen; and the Institute of the Arab World, Paris. Her monograph, Evidence, published by Schilt Publishing Amsterdam in 2014, was hailed by critics and chosen by New York Times Photography critic Teju Cole as one of the two best photography books of the year.