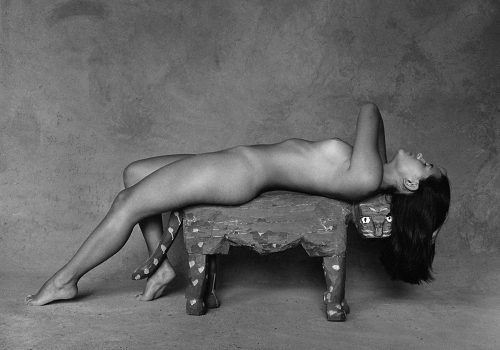 Holden Luntz Gallery has conducted a series of discussions with many of the contemporary photographers that it represents. They are original interviews that cannot be found anywhere else.

In the continuing series, “Dialogues with Great Photographers,” is a conversation with Flor Garduño.

Flor Garduño was born in Mexico City in 1957, later moving at the age of five to a rural hacienda where she lived in close contact with animals and nature. Garduño began studying visual arts at the Academy of San Carlos (UNAM) in 1978 where she became particularly interested on structural aspects of form and space. While at university she met Hungarian photographer Kati Horna who would greatly influence Garduño’s later work with Horna’s magical and expressive images. Garduño then became darkroom assistant to Mexico’s best-known photographer, Manuel Alvarez-Bravo.

This experience would greatly impact not only her later compositions but also her technical aptitude developing silver, platinum, and palladium prints. Garduño would then engage in a photographic project traveling to rural indigenous communities under the direction of photographer Mariana Yampolsky who wasknown for her humanistic approach usually featuring women. These experiences would help Garduño hone her own unique style of descriptive photography infused with mystical archetypes characteristic of Mexican Surrealism.

Today she is internationally renowned for her depictions of Latin American indigenous people, and in particular her symbolic nudes and still-lifes. Garduño’s work has appeared in a number of international exhibitions and in the collections of such respected institutions as the Art Institute of Chicago, the Israel Museum of Jerusalem, Bibliothèque National de France in Paris, the Museum of Modern Art in New York, the Museum Ludwig in Cologne, and the Los Angeles County Museum of Art. Garduño has had several books of her photography published and one in particular, “Witnesses of Time,” (1991) was released in five languages and six editions coinciding with a traveling exhibition to several international museums and institutions.

Sara – What first drew you to photography and what keeps you there? Before you studied visual art at Antigua Academia de San Carlos, did you have an interest in photography or practice it at all?

Garduño – It was during my visual arts studies at San Carlos that I had my first experience with photography. I entered Kati Horna’s atelier as part of my studies and she used to speak about life and about her experiences. At some point she was interested in my work and in me. She helped and supported me in many ways. I can say that she is my teacher, and in fact, few people know or sometimes consider that she was my teacher. Kati taught me how to look, to observe, to make a composition of the scene, and also to put no limits in relation to my imagination and possibilities. Later, when I saw her work I was very impressed because I found so many points of convergence that I realized and understood her interest in my work and her willingness to help me.

Photography is a vital and essential need for me. Working with it makes me feel complete. With the archival pigment prints I am able to work in much bigger formats, I am in another phase where I can combine photo and painting as a whole. I enjoy it immensely.

Sara – You also studied photography with Manuel Alvarez Bravo, the great Mexican photographer. How did this experience influence you and your work, but also how do you see yourself and your own work differently, as a great Mexican female photographer?

Garduño – I did not study with Don Manuel, but I was his assistant for about two years. I began working with him when he was printing platinum photographs and I learned about this technique with him. I not only learned about photography, but also about art in general. His daily discipline and his meticulous and careful work has been something that has marked my own personal work.

Sara – How does your identity being deeply rooted in Mexican culture influence your work?

Garduño – Mexican culture is ancient and rich. It influences Mexicans in a way that is hard to measure. It is part of our being and it makes us see things in a certain manner. I cannot define my work as “Mexican” because I grew up here and this background is a part of me. I think that probably this can surprise the eyes of other people not used to this culture and its traditions and they can feel the “Mexicaness” in it.

Sara – How does your identity as a female influence your work?

Garduño – I think that women have a different perception than men. We see in a different manner and we are interested in other things. It has helped me to introduce myself in a more subtle way and achieve a more immediate and direct communication with my models, mostly in the nude photographs. I believe that the women in my photos would not have been able to open themselves in such a way if the photographer was a man.

Sara – Referring to your nude portraiture, you said that you are “not interested in perfect bodies.” What about imperfections appeals to you as an artist?

Garduño – It does not matter if bodies are fat or thin, big or small. It is their natural beauty in which I am interested in, a non-stereotypical beauty.

Sara – Your nudes are wonderfully sensual, but not overtly sexual. How do you manage to compose the nude body in such an elegant way?

Garduño – I use the body to tell stories, to recreate myths and personal dreams. I have not a sexual motivation when I take pictures of women. It is the working together process, the open-mindedness of the models, the intimacy that makes them blossom as flowers so their most profound emerges.

Sara – What inspires you to pair your models with “props” of sorts: things like live snakes, dead fish, leaves, and flowers? Is it something personal for that particular subject or is it part of a larger theme of your conception?

Garduño – Since I was born, animals and nature have been around me. They are a part of my early alphabet. I have always related bodies, animals, objects, and nature in my work. I like to establish interactions that are sometimes impossible between them, and through these interactions I elaborate my own language and speech.

Sara – In your book Inner Light Veronica Volkow discusses the similarities between your nude portraits and flower still-lives, noting they both are “feasts of an excessive truth, of softness and freedom…” How do you see these two as subjects of similar gravity and meaning?

Garduño – I would add animals to these subjects. Time and time again the three subjects appear, combine, emerge in my work. They are like syllables or phrases that become my personal speech with their own profound meaning.

Sara – Your work is highly personal. Do you make pictures primarily for yourself or do you have a certain audience in mind?

Garduño – I have always worked for my pleasure and delight. If someday I realize that I am doing it for somebody, I think that would be the end.

Sara – If the latter, what do you hope people appreciate when they look at your pictures?

Garduño – It is the look and observation of people that makes the pictures become alive. This is what I want. I have never thought how the public or audiences see them.

Sara – As a well-established artist today, do you look to other artists or artistic media for inspiration at all?

Garduño – Art, literature, music, films, concerts, and exhibitions have always been an inspiration for my work. So yes, I observe other artists or artistic expressions as a way to enrich my perception.

Sara – Do you have certain pictures that you would call your “favorites,” or ones that are very meaningful to you?