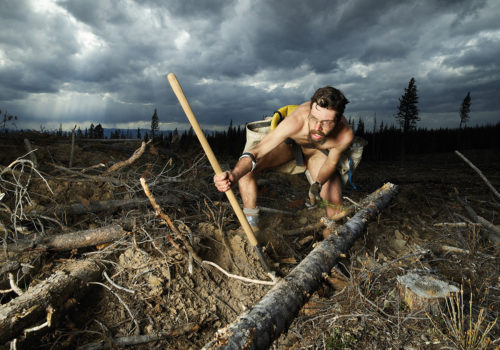 Rita Leistner planted over half a million trees from 1984-93. She spent the next twenty years working as a documentary photographer and photojournalist, primarily in war zones, claiming the backbreaking work of tree planting and the logistical skills she acquired as a crew boss prepared her for thriving in challenging environments.

Returning to the cut-block (the vast swathes of land cleared by logging) in 2016, Leistner “embedded” with a community of 100 tree planters, spending four years living in their bush camps in remote parts of western Canada. She creates heroic and uncanny portraits of work and of the land in homage to the people, profession and environment that were so formative to her.

High production tree planting is only in its second generation (it became necessary with the rise of mechanical logging in the late 1960s). Tree planting is a hybrid industrial labour and high intensity sport, where Canadian tree planters set the bar and are without peers worldwide. Today, tree planting is at a crossroads: the crucial moment at which it is transitioning from being something securely within the forestry industry to a kind of Anthropocene climate change symptom and solution. In addition to the book, the five-year project resulted in large scale works that are in major collections in Canada, and the feature documentary film Forest for the Trees (2021).

Rita Leistner uses photography and film to create portraits of communities in extreme conditions – soldiers in Iraq and Afghanistan, psychiatric patients in wartime, women wrestlers in the United States, drug users on Vancouver’s Downtown Eastside, and loggers in Canada – exploring themes of purpose, struggle, conflict, and belonging. Her books include Unembedded: Four Independent Photojournalists on the War in Iraq, The Edward Curtis Project: A Modern Picture Story (with Marie Clements) and Looking for Marshall McLuhan in Afghanistan. She is represented by the Stephen Bulger Gallery.

Don McKellar is one of Canada’s most acclaimed and prolific artists, a multi-award-winning writer, director, and actor, working in film, television, and theatre. He was a key member of the Toronto New Wave filmmakers and co-founder of the avant-garde theatre collective the Augusta Company.