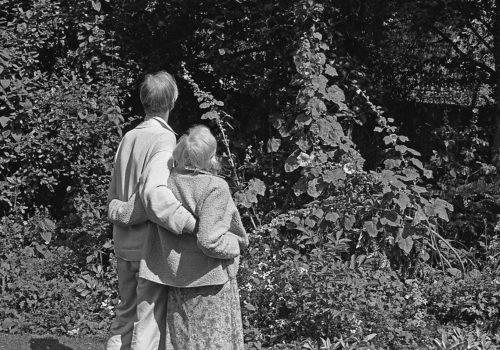 Mother and Father is a moving journal of the final years of a sixty-year marriage. For ten years, from 1997 to 2007 Paddy Summerfield photographed his parents, reflecting on the bond between them, which even the effects of Alzheimers could not break. They become symbols in a drama of balance and tension, which is both domestic and epic. As he says: “I recorded my mother’s loss of the world, my father’s loss of his wife and, eventually, my loss of them both.”

The images are primarily taken in their garden, though the central section shows holiday visits to the Welsh coast, where the raven, a Celtic symbol of death, frequently appears alongside their world. Finally, the once cultivated garden becomes a neglected wilderness, in the absence of the two people who spent long days there, who cared for it, and for each other. These thoughtful, often melancholy, images form a personal piece which is simultaneously universal.

Oxford-based, Paddy Summerfield, trained at Guildford School of Art in the Photography and the Film departments. Photographs he took in 1967, when still a first year student, were published in Album, and spreads in Creative Camera received encouraging recognition. Summerfield first exhibited in London in the late 1960s, and has shown at many galleries, including the ICA, The Barbican, The Serpentine Gallery, and The Photographers’ Gallery. In 1976, Sir Nicholas Serota (then director of MOMA, Oxford) invited Summerfield to exhibit Beneath The Dreaming Spires, his first one-man show. His work is held in the collections of the Arts Council and of the V&A, as well as in numerous private collections.

Other titles published by Paddy Summerfield include Home Movie, Empty Days, The Oxford Pictures and The Holiday Pictures. All are published by Dewi Lewis.