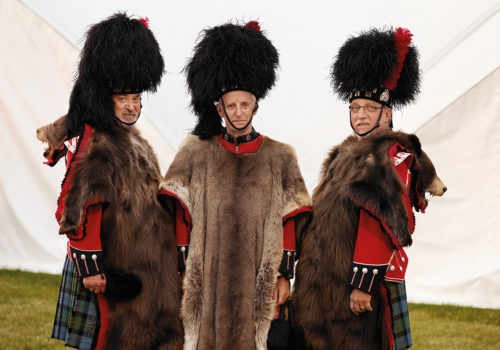 The Queen’s Platinum jubilee took place on June 2nd. Over the years one of her favourite events has been the Royal Windsor Horse Show which takes place each year in the grounds of Windsor Castle. Even at 96-years-old the Queen didn’t miss this year’s event.

Set in the grounds of Windsor Castle, The Royal Windsor Horse Show and Windsor Castle Royal Tattoo is a quintessentially British event on a truly international scale. It is the UK’s largest outdoor show and features international competitions in four different equestrian disciplines. It also encompasses military displays involving The King’s Troop and The Household Cavalry, as well as various other regiments from the British Army, Navy and Air Force. Visiting troupes have also participated, including the legendary French Foreign Legion.

Over the years the Queen has alternated her more formal duties in the Royal Box of the temporary arena with informal visits to members of the regiments, as well as inspections. In the past she would also be seen walking between the many different events that are spread throughout the grounds of the castle – her ‘backyard’.

Leading British photographers Anderson & Low look behind the scenes during this very special week of events, to reveal the remarkably informal and intimate relationship between participants, horse-breeders, support staff and the general public. The resultant images present a superb kaleidoscope of portraits – intimate, truthful character studies of the participants, and of the uniquely magical setting in which this annual pageant unfolds.

For over 25 years, Anderson & Low have collaborated in the creation of photographic and video art projects. Their work is held in numerous public, museum and national collections worldwide and has been featured in the Venice Biennale. Known for their recurrent use of sporting concepts, they have an uncanny ability to instill a sense of trust in their sitters that translates into images of extraordinary candour, beauty and truth.