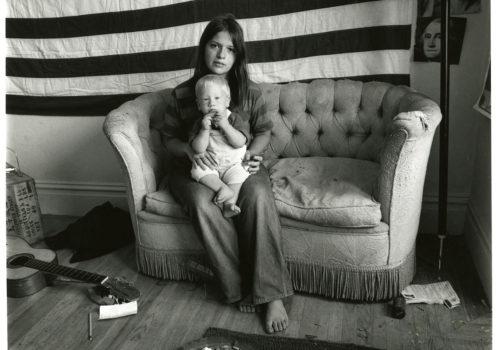 Deborah Bell Photographs presents Elaine Mayes: Haight-Ashbury Portraits 1967-1968, an exhibition of vintage prints of portraits the photographer made in the now-legendary San Francisco neighborhood called Haight-Ashbury. Celebrating the recent publication by Damiani of the book by FotoFocus Artistic Director and Curator Kevin Moore, Elaine Mayes: Haight Ashbury Portraits 1967-1968, the exhibition opens November 17 and will be on view through March 4, 2023. This is the first monograph of Elaine Mayes’s Haight-Ashbury portraits, published more than 50 years after the photographs were taken.

Kevin Moore writes in his text for the Damiani book:
Mayes regarded the young people in her neighborood not as a passing cultural phenomenon but as individuals who defied the media stereotypes. If they are alive to us now, it’s because they embody both a historical moment and a timeless state called youth. They are permeated by a sentiment of tentative idealism, which is both San Francisco in the 1960s and twenty-somethings the world over. Casual, static, and bluntly square format, Mayes grants her subjects agency in their own representation. Many do seem to be urchins of that deflated cultural moment, post-summer of 1967, when the flower children had transitioned from blissed-out idealists to disaffected grifters, when free love turned over to hard drugs, as if the campaign to shake off their bourgeois upbringing had started off strong but then led nowhere, leaving them stranded. What unifies these portraits most is their common sense of poise…a twinkling bewteen adolescence and adulthood, idealism and disillusion.

Elaine Mayes explains her experience in making these portraits:
Early on in the Haight I had realized that the Summer of Love was a media-fueled idea, and the media in fact had created the situation in the Haight. I knew I wanted to make pictures that would show something other than the media version of the Haight Ashbury. Most of the pictures were taken right then and there, exposures of people standing on the street or sitting on stoops or in the park. Sometimes we went to where the person lived. In those days in the Haight, hanging out with strangers was normal. I was using a Hasselblad on a tripod with long exposures and was not looking through the camera when the exposure was made. Everyone I photographed related to my idea for the pictures. After all, it was the ’60s. The Haight Ashbury portraits were from a time and a place that had a particular quality and spirit, with large numbers of young people who hoped to discover a better way of life. That time in San Francisco was unique and transformative for our culture and left its mark on everyone.

Elaine Mayes was born in Berkeley, California in 1936. She graduated from Stanford University, where she majored in painting and art history. After Stanford, Mayes attended the San Francisco Art Institute, where her instructors included John Collier, Jr., Richard Diebenkorn, and Minor White. Mayes was one of a handful of students to study photography in the then-new photography program. She was the first woman to teach studio art photography at the University of Minnesota in 1968. Mayes moved to New York in 1982 and began a teaching career at Bard College, Pratt Institute, the International Center of Photography, and New York University, where she was Chair of the photography department at Tisch School of the Arts until her retirement in 2000.

Kevin Moore is the artistic director and curator of FotoFocus. He is the author of Old Paris and Changing New York: Photographs by Eugène Atget and Berenice Abbott (Yale University Press); Starburst: Color Photography in America 1970-1980 (Hatje Cantz); and Jacques-Henri Lartigue: The Invention of an Artist (Princeton University Press).