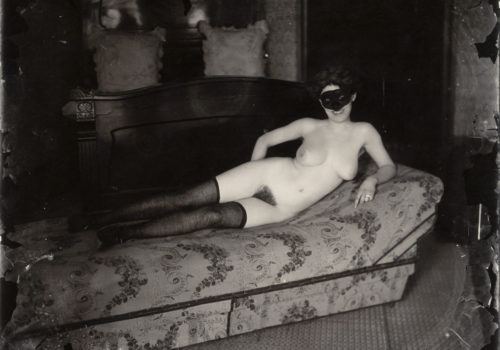 One of the great exhibitions from last year that we were unable to present to you on time.

So we’re making it up today!

The exhibition was held at Deborah Bell Photographs in New York.

E.J. Bellocq (American, 1873-1949) remains an ambiguous figure in history. Following his death in 1949, eighty-nine glass plate negatives of portraits of female prostitutes from New Orleans’ Storyville district were found in his desk. All of the images were taken circa 1912 by Bellocq, who was a commercial photographer practicing in New Orleans. Photographer Lee Friedlander acquired the plates in 1966 and made contact prints of the 8 x 10-inch negatives on the same gold-toned printing out paper that Bellocq used in his rare prints. Friedlander is credited with salvaging and promoting these pictures, the only aspect of Bellocq’s work known to have survived. The mystery surrounding the photographs and the personality of E.J. Bellocq is furthered by the fact that many of the plates were cracked, scratched, or damaged at the time that Friedlander acquired them. In 1970, The Museum of Modern Art, New York, exhibited a survey of the Bellocq prints made by Friedlander, and published E.J. Bellocq: Storyville Portraits, edited by John Szarkowski and Lee Friedlander. A second monograph, E. J. Bellocq: Photographs from Storyville, The Red Light District of New Orleans, edited by Friedlander and Mark Holborn, was released in 1996. The glass plate negatives are now in the permanent collection of the Metropolitan Museum of Art, New York.

In her eloquent essay, Bellocq Époque: The “Storyville Portraits,” published in the May 1997 issue of ARTFORUM, the photographer Nan Goldin writes:

“When one thinks of the massive amount of negatives and glass plates one comes across  in flea markets and thrift shops, Friedlander’s power of discrimination becomes even more admirable, rivaling Berenice Abbott’s rescue of Eugène Atget’s work from oblivion.

At the turn of the century…the experience of being photographed was far different.

At that time, it would have been a special occasion, a form of attention that required time and collaboration. In spite of the large, unwieldy 8 x 10 camera, Bellocq’s pictures appear natural, and the women seem open and trusting. There’s a nonthreatening presence with an unprecedented degree of empathy permeating his work, rather than the usual sense of someone in a power position objectifying his or her subject.”

This exhibition was held in association with Fraenkel Gallery, San Francisco.